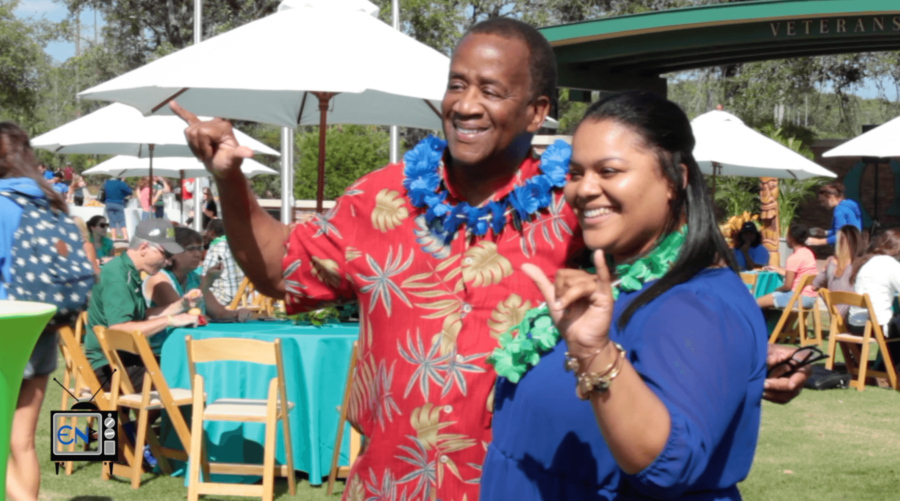 President Wilson Bradshaw made his final speech before the FGCU student body at the President’s Farewell Luau on the Library Lawn Tuesday, April 25.

After a decade of serving as FGCU’s president, Bradshaw is set to retire on June 30.

“I can’t believe it’s already been ten years…watching this institution grow and mature and expand and the hard work that the faculty and staff do has made my experience here at Florida Gulf Coast University something special,” Bradshaw said during his speech.

Bradshaw believes Martin will continue a legacy of dedication to the university.

“(He) is exceptional in a lot of ways,” Bradshaw said. “He’s accomplished, he’s experienced…and has great enthusiasm. He is developing a deep affection for Florida Gulf Coast University, and who wouldn’t?”

Bradshaw is the longest-serving president of FGCU.

His first term began in 2007 when he was elected as the third president of the university.

Under his leadership, FGCU enrollment has increased dramatically and so has FGCU’s prestige in academics.

After his retirement, Bradshaw is looking forward to spending time with his sons and wife, Jo Anna.

“(Jo Anna) and I built our retirement home in St. Augustine,” Bradshaw said. “Fishing, traveling, (I’m) looking forward to that.”

Bradshaw will also start teaching classes at FGCU in fall of 2018.

Before coming to FGCU, Bradshaw conducted research in neural and endocrine regulation, and his classes will relate to his passion for psychobiology.

Bradshaw’s excitement about his retirement plans was reflected in the decorations and food on the lawn. Tables with pineapples, pork sandwiches and snow cones were the focal point of the event, as students stopped by to share in the celebration of Bradshaw’s commitment to FGCU.

FGCU students She Keema-Striggles and Patricia Michele enjoyed the food spread out in front of the Veteran’s Pavilion.

The Alumni Association, a group of former FGCU students who hoped to honor the service Bradshaw has done for FGCU and welcome the future President-elect, hosted the Luau.

The high spirits of the luau took on a more somber tone as Bradshaw thanked the association and his colleagues.

“I have been so fortunate to work with committed trustees who have become increasingly involved with the life of the university,” Bradshaw said, “…so thank you all for allowing me to be a part of this phenomenon, and rest assured the leadership is going to be very, very good. Dr. Martin will serve with great distinction. So, for my last time, can I get a ‘Go Eagles!’ on three?”