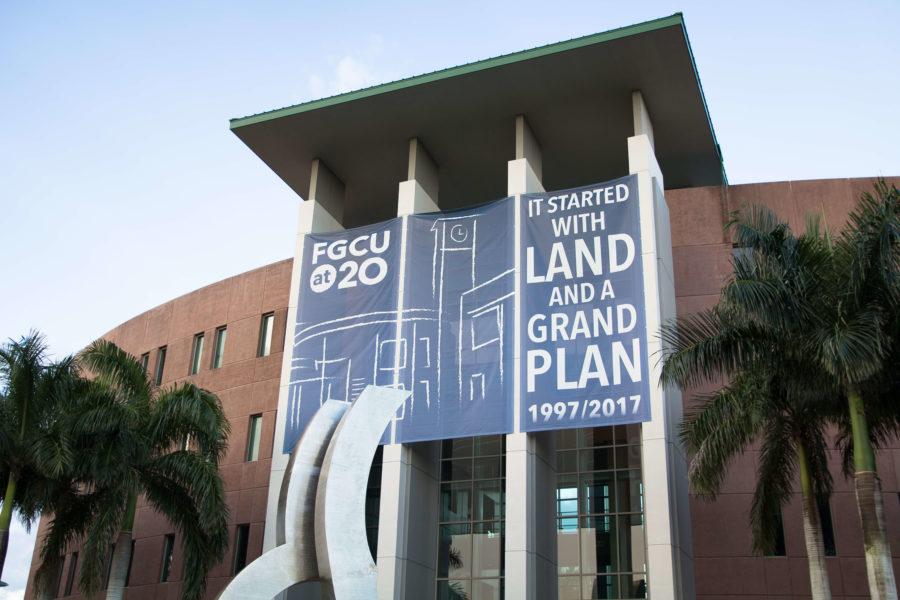 FGCU was once 760 acres of Florida pinelands and cypress forests. Wild pigs lived in the woods bordering FGCU Boulevard. There were three vending machines that served as the cafeteria. The first commencement consisted of only 81 students.
Today, 14,846 students are enrolled in the University—and this number only continues to climb.
In just 20 years, FGCU has seen incredible amounts of growth. There are now 180 student organizations, 39 residential buildings, and, as of Spring 2015, 23,000 graduates.
Throughout last year, FGCU’s progress was celebrated with campus events and the creation of the FGCU at 20 website, which compiles all of FGCU’s history into one place accessible to students, alumni, and faculty.
In an interview, Deborah Wiltrout, co-chair of the FGCU at 20 committee, said “The website was a big undertaking. It’s been a long project and we will have ended up celebrating the anniversary for a year.”
The 20th Anniversary Celebration on Friday, Aug. 25 completes the circle of anniversary events. In 1997, exactly twenty years from Aug. 25, FGCU had its inaugural first day of classes for the first group of students to ever attend the university.
According to the FGCU at 20 website, the library was only a “portable trailer with a few long tables and chairs” in 1997. Now, in 2017, students will soon gather on the Library Lawn for Week of Welcome events, the four-story library rising behind them in the background.
Events like the upcoming 20th Anniversary Celebration are meant to commemorate the striking growth FGCU has made in only two decades.
“[Our goal] is to bring awareness of the progress made in 20 years…and to help people feel connected to the history of the university,” Wiltrout said.
As co-chair of the FGCU at 20 committee, Wiltrout has spent long hours planning 20th anniversary events and gathering research from the community on how they would like to honor FGCU’s 20 years.
“My job is to make sure that all the voices of the university are represented…that they’re heard. I’ve implemented committee ideas and helped to market the anniversary with signs and events…so that people feel engaged.”
When asked what she has enjoyed most while working on the FGCU at 20 project, Wiltrout said, “I’ve loved getting out into the community and hearing stories from all kinds of people, and how proud they are of the progress of the university. Everybody has a connection to FGCU…and the anniversary is a celebration of that connection.”
One member of the university who is just beginning to forge his connection with FGCU is President Michael Martin, who will be addressing the student body for the first time at the 20th Anniversary Celebration.
Martin was unanimously selected by the Board of Trustees to serve as president, and officially became acting president on Jul. 1.
Martin is the fourth president of FGCU, and his arrival adds a special element to the 20th anniversary, initiating the next decade of growth.
Ten years ago, former president Wilson Bradshaw’s arrival to FGCU on its 10th anniversary signaled a switch from a celebration of FGCU’s ten years of history to a celebration of FGCU’s future. When Bradshaw arrived at the university, Seidler Hall had just been opened and the Board of Trustees had just attained the Eagle Challenge Course in Buckingham.
On Aug. 25, Martin will do for FGCU in 2017 what Bradshaw did in 2007: help the university use the lessons of its past to create the best possible outcome for its future.
“It’s two fold,” Wiltrout said when asked what she believed distinguished FGCU’s 20th anniversary from its past anniversaries. “It’s rate, it’s looking back at how much we’ve accomplished. But it’s also exciting to look forward. If we have accomplished this much in 20 years, then imagine what we will accomplish in the next 20. From here, the future looks very bright.”