FGCU men’s soccer open season with 3-1 loss to No. 3 Denver 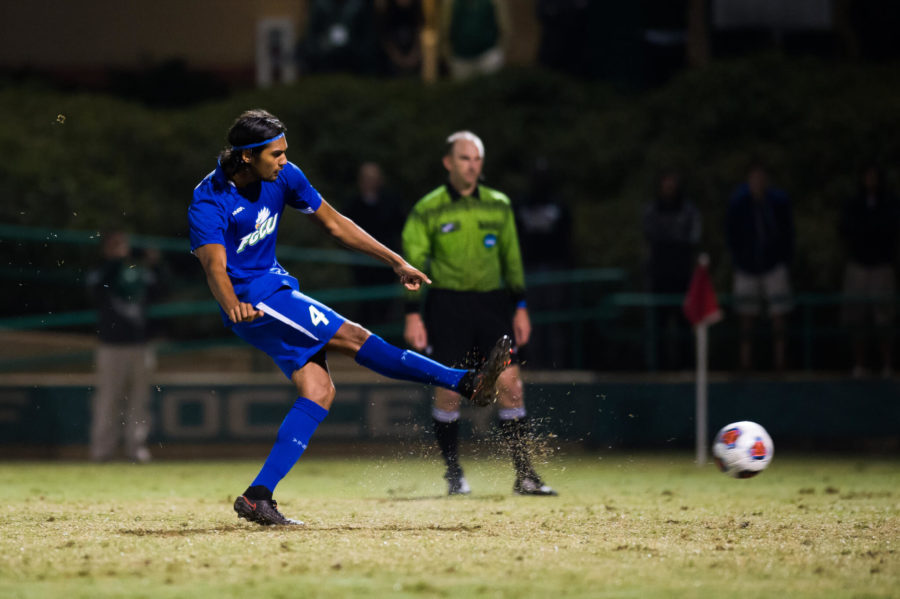 The FGCU men’s soccer team traveled to Colorado to face off against the University of Denver for the first time in program history. The Eagles fell after a tough fought battle in the second half, 3-1 to the No. 3 Pioneers.
However, FGCU played without two key players – Albert Ruiz and Kamar Marriott – due to injuries.
Denver struck first in the 9th minute by way of Andre Shinyashiki after a ball from Kyle Morlack was crossed in over the backline.
The Pioneers lead was short lived after Nicolas Samayoa converted the equalizer. The ASUN Preseason Defensive Player of the Year headed a cross from Dennis Zapata into the opposite upper 90.
Immediately following, the Pioneers were faced with an opportunity where they had FGCU goalie, Jared Brown in a 1-on-1 situation.
Brown charged off the line to make the save keeping the score at 1-1 going into the half.
The Eagles came out early in the second half with more aggression in the effort to secure the all important second goal.
Nick Gardner continued to deny FGCU until his own side found the back of the net in the 73rd minute, making the score 2-1 in favor of the Pioneers.
Just five minutes after that, the Pioneers struck again to make it 3-1, ending the game in favor of Denver.
FGCU will now travel up to Colorado Springs to face Air Force who is off a 1-0 win over Missouri State. The Eagles face off against the Falcons at 1:30 p.m. on Sunday.