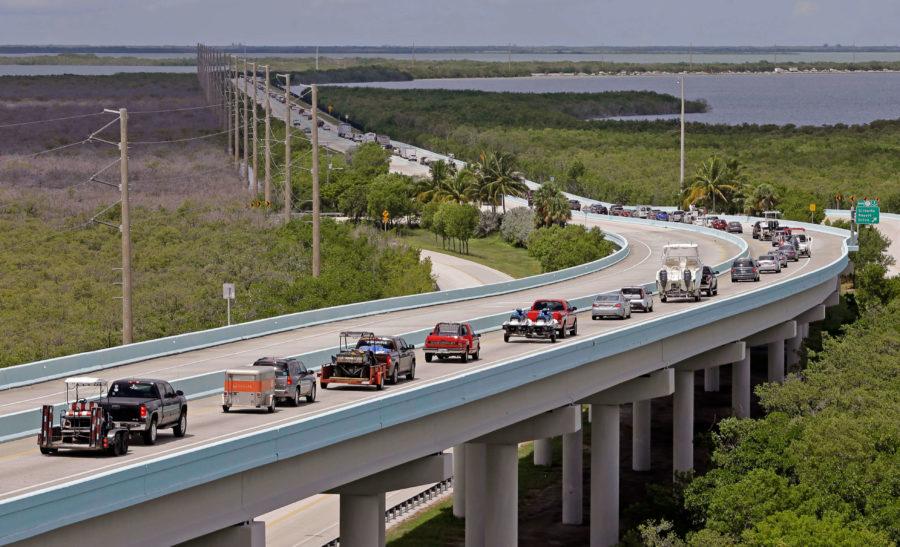 Hurricane Irma’s impending threat has called for a mandatory evacuation order that will take effect Friday for barrier islands in Lee County.
The order requires those residing in Bonita Beach, Pine Island, Fort Myers Beach, Sanibel and Captiva to evacuate. Residents in mobile homes are also encouraged to evacuate.
Tolls have been waved for all bridges in Lee County to facilitate the evacuation process.
According to the National Weather Service, Hurricane Irma is about 760 miles east-southeast of Miami, maintaining its Category 5 status with sustained winds of 175 miles per hour.
In a 5 p.m. update from the National Hurricane Center, Irma’s path has shifted west, placing West Coast Florida and Central Florida at risk of a direct hit.
According to the NWS, the storm is moving west-northwest at 16 mph and is forecasted to move across the Bahamas today and Friday before landing in South Florida this weekend.
South Florida will begin to see Irma’s effects early Saturday through Monday.
As Irma roars toward Florida, places like Glades, Hendry, Inland Broward, Inland Palm Beach, Metro Palm Beach and Metro Broward Counties are under a hurricane watch.
Storm surge watches have been issued for Coast Broward, Coastal Collier, Coastal Miami-Dade, Coastal Palm Beach, Far South Miami-Dade, Inland Collier, Inland Miami-Dade, Mainland Monroe and Metro Miami-Dade counties.
A storm surge is a rapid rise in sea level caused by areas of high and low pressure. It is often the most devastating effect of hurricanes because of the mass damage this flooding can create.
Irma is projected to produce anywhere between 15-25 feet of storm surge if she makes landfall in Florida.
At the state Emergency Operations Center in Tallahassee this morning, Scott said, “My biggest concern is the amount of storm surge this will bring.  We’ve never seen this before…not even with Andrew. This can kill you.”
The possibility of the storm surge, in combination with Irma’s 180 mph winds, has caused the Florida Emergency Operations Center to issue a threat level of 1, the highest threat level possible.
Other Floridian counties have issued mandatory evacuations due to Irma’s impending threat.
According to Palm Beach County emergency officials, about 125,000 residents have been ordered to evacuate Friday morning.
FGCU Police Chief Steve Moore sent an emergency management advisory in an email to students, on Thursday, Sept. 7.
According to the email, housing will remain open, however, Alico Arena will serve as a shelter should housing close.
Students and residents are encouraged to monitor Irma’s progress and have an emergency plan in place should Irma make landfall.