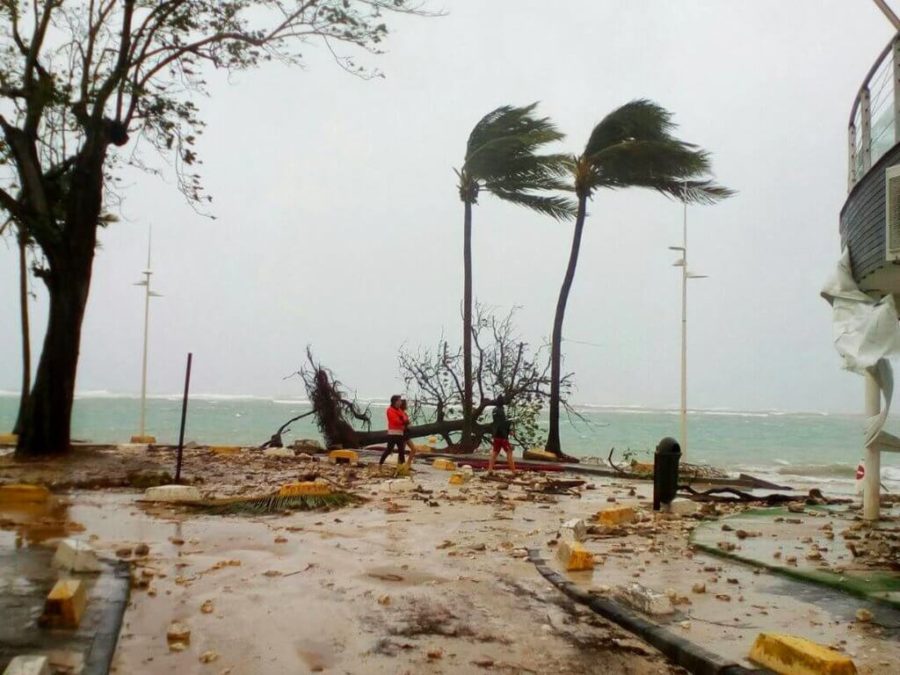 Overnight, Hurricane Maria thrashed the island nation of Dominica with Category 5 force winds up to 160 mph.
Roosevelt Skerrit, Prime Minister of Dominica, wrote on Facebook “Initial reports are of widespread devastation. So far we have lost all what money can buy and replace. My greatest fear for the morning is that we will wake to news of serious physical injury and possible deaths as a result of likely landslides triggered by persistent rains.”
Maria initially weakened to a Category 4 after passing through Dominica, but according to the latest updates from the National Hurricane Center, Maria has again strengthened to a Category 5.
Maria is set to hit the U.S. Virgin Islands, the British Virgin Islands and Puerto Rico early Wednesday morning.
Conditions could be especially devastating for Puerto Rico, which is sheltering thousands of Caribbean residents who were displaced by Hurricane Irma.
Following Maria’s landfall on Puerto Rico, Maria is expected to take a northward turn. This turn would spare Florida entirely, but would increase the danger of her affecting the Carolina coast.
Meteorologists predict that if Maria does take this sharp of a northward turn, she could interact with Hurricane Jose, which has been circling in the upper Atlantic for days as a Category 1.
This interaction between hurricanes is called the Fujiwhara effect, named after the discoverer, Sakuhei Fujiwhara.
In this case, the Fujiwhara effect could cause a large hurricane, like Hurricane Maria, to absorb a smaller hurricane, like Jose.
While this mega hurricane sounds potentially disastrous, it would actually be good news.
As the two vortices orbit around each other, Maria could end up being thrown farther into the Atlantic, back towards Africa, sparing the mainland U.S. entirely.
While this would be a welcome scenario, it’s still too early to tell where Maria might turn and if this effect could occur.
As with Irma, we’ll just have to watch and wait.
Check back with Eagle News for the latest updates.