FGCU Women’s Soccer plays to a 0-0 draw vs. Stetson 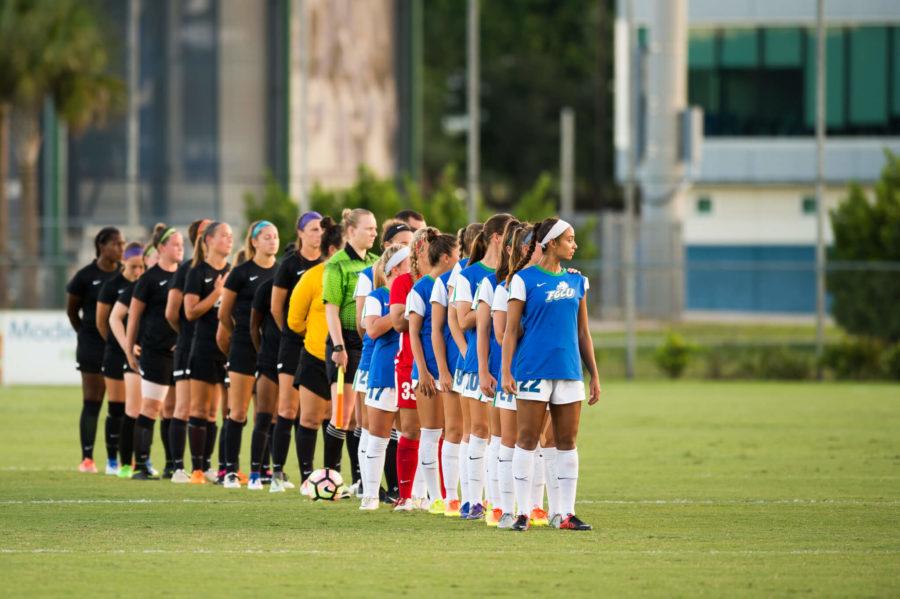 The FGCU women’s soccer team opened up ASUN play in Deland, Florida with a 0-0 draw versus the Hatters.
Despite not getting a win, the Eagles extended their unbeaten streak in conference play to 45 games, which is fourth longest in Division 1 history.
“Defensively we played well,” said head coach Jim Blankenship to FGCU athletics. “It’s a little bittersweet because while we got the shutout, we’re accustomed to getting better results. We had some chances, their keeper made a couple of really good saves and I think this is one where both teams had that one really good chance they couldn’t finish.”
Both teams had many chances throughout the game, but both Mellissa Weck and Emily Plotz made seven and nine saves, respectively, though FGCU had four more shot attempts.
In the opening ten minutes of the match, both teams had dangerous chances from outside the box, but neither team was able to get anything on target.
The Eagles started to generate some chances as the half went on as Kiana Rugar hit the post with a shot. Just a few minutes later, Marjorie Boilesen was taken down for a free kick, but her shot sailed wide.
Varin Ness and Boilesen also had chances in the half in the 31st minute, but Plotz denied both, and the two teams went into half scoreless.
Out of the break, FGCU earned four corner kicks within the first 15 minutes of the half, but nothing was able to get into the net.
Boilesen had a few more chances in the second half on free kicks that were all defended well, as both teams combined for 29 fouls in the match.
In the final minute of regulation, FGCU generated a corner that landed into the hands of Plotz, and the game headed to overtime.
Weck made a few saves in the opening OT, and Plotz made one big save on Holly Fritz in the second OT, but neither team converted and the game ended in a draw.
“Overall, I’m pleased with the shutout and hopefully as we go forward, the urgency of conference play kicks in,” Blankenship said. “We’re going to have to be a lot cleaner in front of (the) goal.”
FGCU will travel back to Fort Myers for a rematch of the ASUN Finals from a year ago versus Lipscomb on Friday, Sept. 29, at 7 p.m. The Eagles will then take on Kennesaw State on Sept. 31 at 1 p.m.