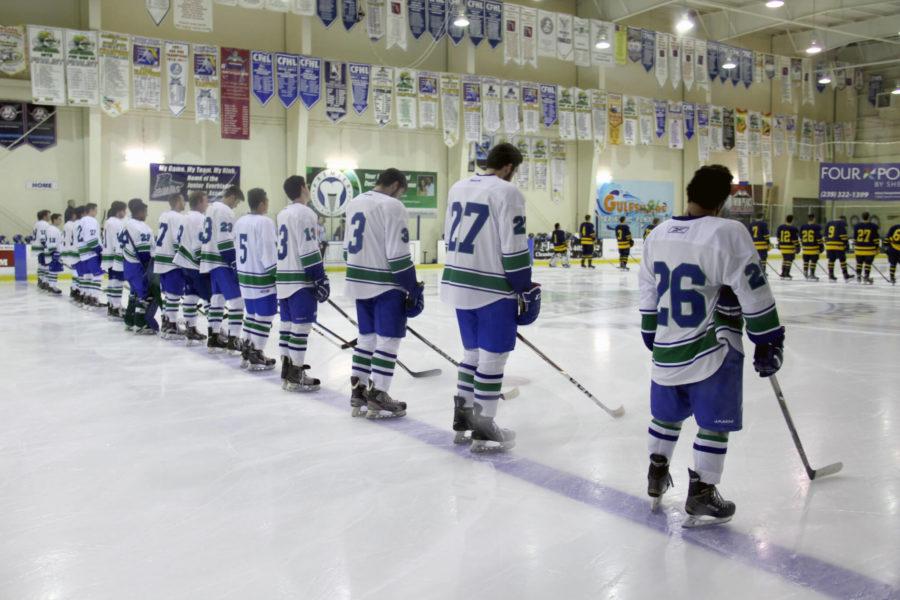 FGCU’s DII hockey team defeated the USA Women’s National team 7-4 in front of a packed house at Germain Arena on Friday night. The Eagles used both their size and speed to grab a victory over the USA team headed to the next Winter Olympics in Pyeongchang, South Korea.
The Eagles used three of their four rostered goalies that night―Tyler Tracy, Jake Carter and Bradley Rambhajan―, while assist captain Jordan Klotz led the Eagles with a hat trick on the night.
The Eagles, much to the same groove of last season, got out to a quick dominating start, scoring four goals in a span of 9:05.
Josh Koerner got the game started with a nice forechecking turnover in the USA end, stealing the puck and sneaking past defenders before a quick dangle and going glove side on Alex Rigsby.
The Eagles scored again with a nice play sprung by Trevor Mullaly who sent a no-look pass between his legs to Klotz in the slot who was waiting to fire it by Rigsby’s glove.
A little over a minute later the Eagles added to their lead with a goal from Keaton Arkeilpane showcasing his speed down the left-wing boards, tearing by USA defenders before further exposing Rigsby’s glove side to put the Eagles up 3-0.
Shortly after killing a penalty, Jake Leonard scored off a quick pass down low from Shawn O’Meara, extending the Eagles’ lead to 4-0 at 9:05 of the first period.
Team USA got on the board a little over 12 minutes into the period when Brianna Decker was fed a cross crease pass that Tracy couldn’t slide over to save. This was just the flame needed to start the fire for team USA.
Shortly after the powerplay goal, team USA found the back of the net again when Tracy couldn’t track down a bouncing puck that ended up on the stick of Kali Flanagan before she clapped it to the back of the net.
The Eagles got into more penalty trouble at 14:56 when Koerner headed to the sin bin for tripping. This proved costly for the Eagles, as Hannah Brandt would put team USA within one with a shot from the slot that snuck past Tracy’s glove side.
Shawn O’Meara would put the Eagles back up by two before the intermission with a powerplay goal, and after a high scoring period the score was 5-3 Eagles.
Both teams would make a goaltending change in the second period as newcomer Jake Carter got the nod for the Eagles and Maddie Rooney was between the pipes for team USA.
The goaltending change for team USA seemed to calm down and refocus the team as Rooney saved all ten shots fired her way in the period, showing her flexibility as she robbed multiple players by stretching out along the ice.
Brianna Decker would pull team USA within one goal again with 3:23 remaining in the period, and with that goal send the two teams to the locker rooms for the second intermission.
The Eagles changed up their goaltending once again in third, giving Bradley Rambhajan his first action of the season. Rambhajan would pick up right where he left off last season, stopping all 16 shots fired his way in the period.
Klotz tallied his second goal of the night just 1:15 into the third with a wide-open shot in the slot, beating Rooney on the blocker side.
Rambhajan came up big in the middle of the period, putting away multiple opportunities on a delayed penalty. So as not to outdo himself, he made a huge stretching glove save where it looked as if his arm extended more than halfway across the width of the net, keeping the Eagles with a two-goal lead.
With 2:43 left, Rooney provided late game heroics of her own with a huge save to keep team USA in the game before being pulled at 1:31 for the extra attacker.
Klotz capitalized on the empty net late in the game to obtain his hat trick late, sending the Eagles off with a 7-4 win over team USA.
The Eagles kick off their regular season action on the road next weekend as they take on the University of Louisville on Friday and Penn State University on Sunday.