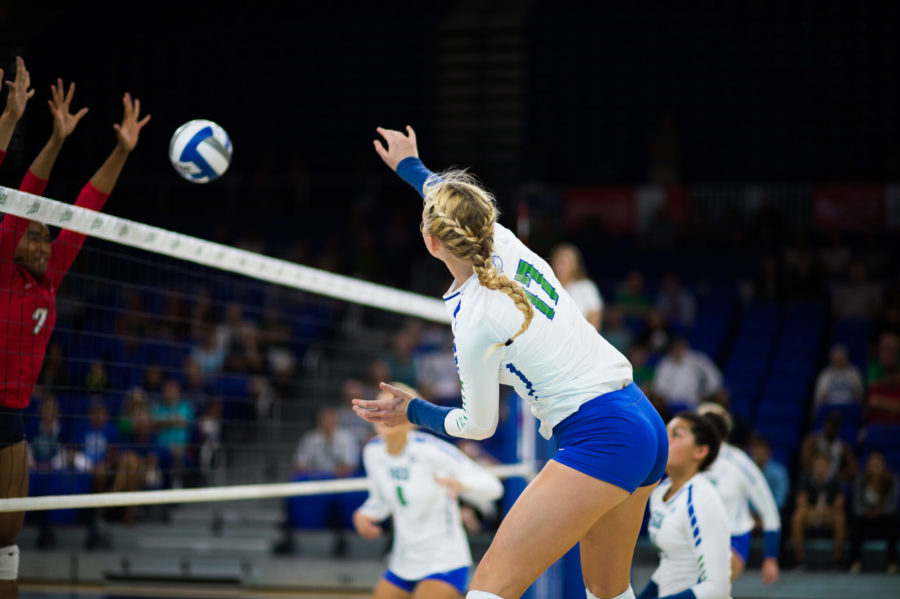 After losing its first conference game Friday to Kennesaw State, the FGCU volleyball team dominated the 2016 ASUN Champion Lipscomb in four sets the following night―25-18, 25-18, 19-25, 25-23.
FGCU started the first set off strong with two quick kills from Amanda Carroll and Cortney VanLiew, giving the Eagles an early 2-0 lead. When FGCU built a couple of leads, Lipscomb always managed to jump right back in the set. However, with FGCU up 23-18, the freshman duo finished it off.
A kill from Snowy Burnam and Cortney VanLiew gave victory in set one for FGCU.
Scoring runs was key throughout the second set. With the Eagles on top 8-7, the aggressiveness of Daniele Serrano and VanLiew allowed FGCU to produce a significant 3-0 run to put them up 11-7. However, Lipscomb gave the Eagles a taste of their own medicine.
Three kills from Lauren Anderson allowed the Bisons to even things up at 11. With FGCU leading late in the set 17-15, simple mistakes by Lipscomb allowed the Eagles to capitalize, pouring on a 4-0 run to take a six-point lead, 21-15.
A service error from Bison’s Brittany Thomas gave the team a commanding 2-0 lead in sets at the intermission. This looked as if FGCU was on its way to sweeping their ninth opponent on the season. However, Lipscomb fought adversity and put the brakes on the Eagles in the third set.
FGCU was able to jump out to a 3-0 lead, thanks to Cortney VanLiew and Maggie Rick’s kill. Lipscomb was finally able to come alive and string together a crucial and decisive 6-0 run to grab its biggest lead of the night at six, 17-12.
A kill from Maddie Phillips to secure a third set win gave the Bison a boost of confidence and momentum heading into the fourth set.
In the fourth, the Eagles quickly took a 2-0 lead, as Cortney VanLiew continued her dominant offensive performance. The Eagles were able to produce two 3-0 runs during the set, and Megan Kuper’s service error was the icing on the cake, securing victory for FGCU.
Offensively, Cortney VanLiew and Amanda Carroll combined for 32 kills that night. Maggie Rick finished with 38 assists. Normally coming off of the bench, Burnam produced a great outing tonight, finishing with eight kills.
FGCU will travel back home and begin practicing Monday at Alico Arena in preparation for its first home match versus another conference foe, the USC Upstate Spartans, Friday night at 7 p.m.