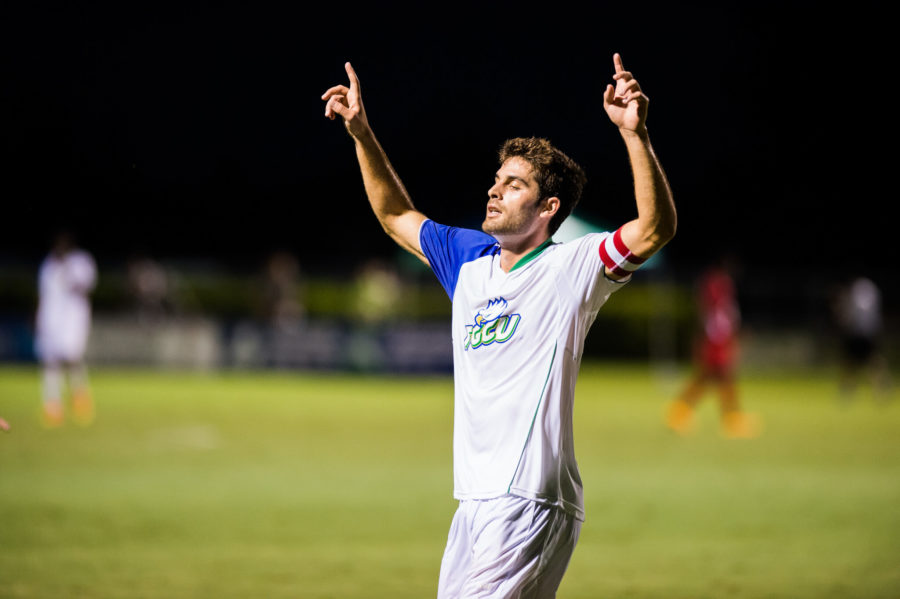 Playing in his first game back from injury, the nation’s leading goal scorer a season ago, Albert Ruiz, notches his first of the season in the Eagles’ 3-2 win over #24 Omaha.
“It has been a tough summer, tough five months, but it’s the power of the mind,” Ruiz said. “Three months ago I started thinking of this day and how I can make an impact. I knew I wouldn’t be 100 percent physically, but you need to find a way to make an impact.”
Not only was this the Eagles’ fourth consecutive win, it also was FGCU’s 100 career win as the Eagles move to 5-3-1 on the season.
Playing in the rain for portions of the match, the Eagles started the match with most of possession in the first few minutes. Shak Adams had the first good scoring chance for FGCU, as his cross nearly connected with Dennis Zapata for the opening goal.
Adams had a good chance that was then saved moments later, but the Mavericks came the other way. After a foul on the Eagles, Xavier Gomez’s free kick off a set piece went right to the head of Elvir Ibisevic, who beat Jared Brown for his seventh of the season to go up 1-0. This was the first time the Eagles have trailed in a match since Sept. 3 at Central Connecticut State.
The Eagles nearly tied the game later, as Miguel Jaime’s shot was on goal, but not passed Ghitis. After a foul just outside the box, Kareem Riley fired a shot that was stopped by Ghitis as well.
With just under 15 minutes remaining, Albert Ruiz made his return to the field, and quickly the Eagles had a majority of the possession deep in the Mavericks territory.
Right before the break, it looked as though Ruiz looked to be in some pain, but he got back up. After a flurry of chances in front, Ruiz came through and tied the game at one on an assist from Miguel Perez, as the two teams went into the break even at one.
Zapata had the Eagles 11th shot attempt of the match 10 minutes into the second half, but Ghitis was there for the save. However, with 31:01 to go, Miguel Jaime set up Chris Clement, putting FGCU ahead 2-1 with his first collegiate goal for the defender.
Just 1:39 later, Riley from roughly 40 yards out fired home his first collegiate goal to put FGCU up 3-1.
The Mavericks got one back with just over 10 minutes remaining on a goal from Ed Gordon to cut the lead to 3-2.
After a seventh and eighth yellow card was given after Ruiz was fouled, the Eagles’ free kick resulted in a turnover, which led to a shot from Ibisevic from way out, which went wide.
The two teams continued to mix and match with their matchups as both teams substituted until the final minutes. Omaha earned a corner with less than three minutes left, but Steve Siy’s shot went wide. Eli Roubos prevented a late scoring chance, and FGCU held on for the win.
“I thought we played a fantastic first half,” head coach Jesse Cormier said. “I thought we managed the game excellent(ly) in the first half and we had a real advantage. I thought we were dangerous. We created numerous opportunities. When Albert (Ruiz) shows up on the scene, he showed us how to do it.”
FGCU will remain home for a conference showdown with the Lipscomb Bison’s on Saturday, Oct. 7 at 7 p.m., as the Eagles look for their fifth straight win.