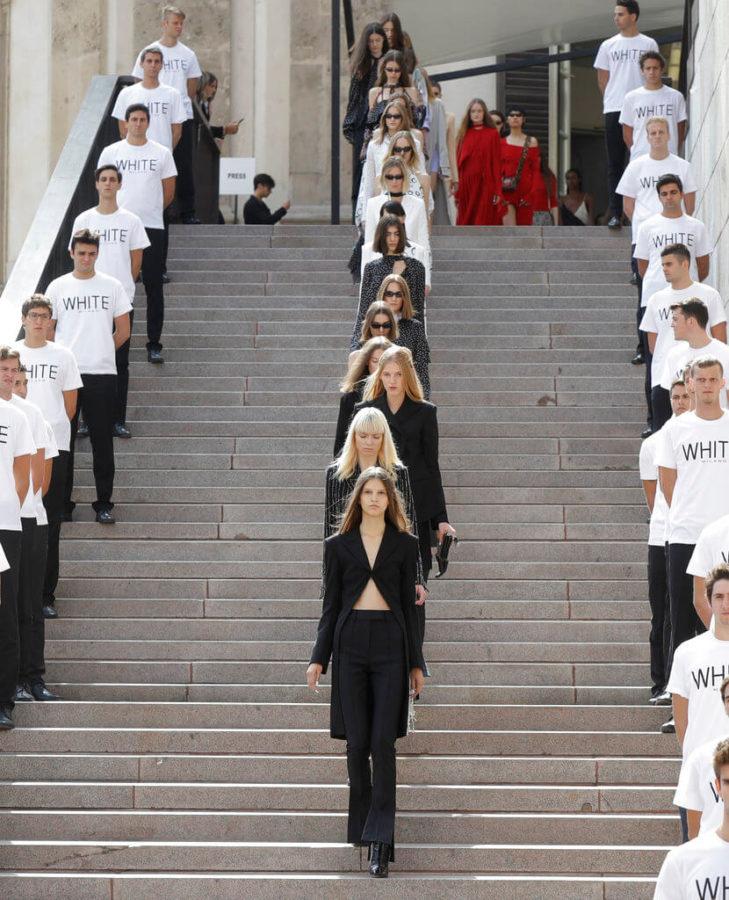 As Milan Fashion Week comes to a close, the top moments of the week stand out as new trends begin, old trends reappear and iconic moments are recreated.
After hosting multiple high-profile shows, Dolce & Gabbana was a brand to watch this week. Their first was a pop-up show that occurred at the city’s La Rinascente department store. Their second was a “secret show,” one so exclusive that only their wealthiest clientele attended. Their final show was the Spring 2018 Line, which was “Queen of Hearts” themed.
The final show began with lingerie models stepping out onto a stage with giant playing cards as a backdrop. Spotlights flashed over the models as they stood, frozen. As the lighting in the room changed from ominous to bright, the models stepped off the stage, one by one, to show off their red-accented sheer dresses.
With a 109-model lineup, many new designs debuted.
The collection, which began with lingerie and continued on to casual dress, featured pieces inspired by playing cards, lots of glittering jewels and, interestingly enough, food. Some models carried bags full of lettuce, while other models wore food as necklaces, earrings, and headwear.
Versace re-created an iconic moment from the ‘90s for the finale of their Milan Spring Show.
In 1991, Gianni Versace booked the most famous models of the time, and together they walked down the runway to George Michael’s song “Freedom.”
For the 2017 show, Donatella Versace decided to recreate the moment by reuniting some of Gianni’s favorite models – Cindy Crawford, Claudia Schiffer, Carla Bruni-Sarkozy, Naomi Campbell and Helena Christensen.
Dressed in gold chainmail gowns, the five models posed together before Donatella led them down the runway.
A few months ago, multiple celebrities stepped out, donning monogrammed accessories and clothing, exuding an early 2000s vibe.
Many wondered if the designer monograms weould be  just a blast-from-the-past passing fad or if they would once again be a full-blown trend. Milan Fashion Week has proven that they’re here to stay.
MaxMara presented an archive logo on some of his designs, as did Fendi and Gucci. Expect to see designer logos everywhere again soon. They’re not going anywhere except straight off the runway and into stores.
The Milan runways also saw a lot of denim. While denim-on-denim has slowly been making its comeback, its massive runway debut shows that it’s trending once again.
From jumpsuits to dresses to classic jeans and a button-up, denim is a must this spring.
Fanny packs have also made their way back into popularity. As a practical accessory, their continued appearance on the runway demonstrates their impact.
Milan is the third global fashion week to see fanny packs, marking it as a massive trend worldwide.
Designers, models, and fashion fanatics alike continue to decompress from the high-fashion week in Milan, gearing up for travel as they prepare for Paris Fashion Week, the final week of the global month of fashion.