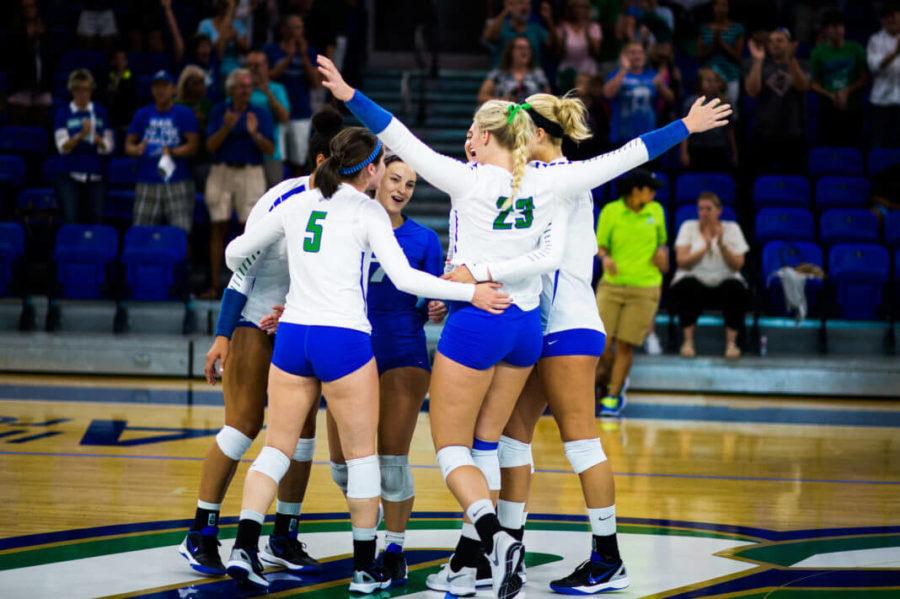 The FGCU volleyball team returned back to Alico Arena and dominated USC Upstate 25-17, 25-18, 25-19. The Eagles began the match on a 3-0 run, in large part to an Amanda Carroll kill, who continues to produce offensively on a nightly basis.
Carroll was honored pre-game in recognition of her reaching 1,000 kills on the season. The Eagles were able to stretch their lead to 12-5, as Daniele Serrano produced two kills. The Spartans (5-12, 2-2) never led in the set. They were able to produce a run every now and then, but it was all FGCU early on.
A service error by Madison Haake clinched victory in the first. USC Upstate jumped out on top early in the second, leading 3-0.
With the Spartans leading midway 9-7, FGCU went on a crucial 4-0 scoring run, with kills coming from Maggie Rick, Cortney VanLiew, and Daniele Serrano to lead 11-9.
Leading 22-18, two kills from Carroll and one kill by freshman Snowy Burnam gave the Eagles a commanding 2-0 lead in sets heading to the locker room.
The third set began with a back-and-forth battle between the two. With USC Upstate leading 5-4, the Eagles raced to a 4-0 scoring run, thanks to the freshman duo of Burnam and VanLiew, and a kill from Maggie Rick to lead 8-4. Two times in the set FGCU went on a 3-0 run, stretching the lead.
The Spartans quickly scored two points, forcing FGCU to call a timeout.
A 5-0 scoring barrage, involving kills and a service ace secured victory number eleven for FGCU. The Eagles 3-1 conference record is tied for second place in the standings with Kennesaw State.
Offensively, Carroll led the way with 15 kills, freshman Snowy Burnam finished her night with 11 kills. Maggie Rick’s 37 assists led the way, to go along with 17 digs from Karissa Rhodes, and 12 digs from senior Courtney Stephens.