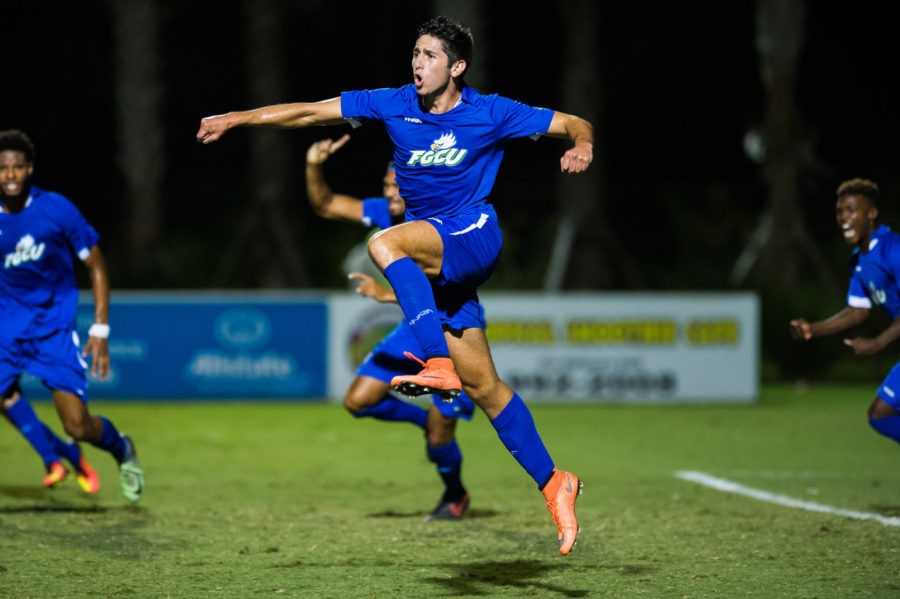 After leading #14 FIU 3-1 with less than 20 minutes to go, the Eagles lose 4-3 (OT), allowing a goal in both the final minute of regulation and OT to fall to 6-4-1 on the season.
“Tonight is a bad loss,” head coach Jesse Cormier said.  “In so many ways we were in a great position versus a nationally ranked opponent, and we could not just finish the job. I give FIU a lot of credit because they could have rolled over, but they kept fighting and fighting and kept inching toward the result. As a coaching staff and a team, we should be embarrassed.”
Despite the loss, Connor Gavigan moved into a second place tie with nines save in the match, as the freshman’s moves dropped just his third game of the season.
The Eagles got off to a strong start as Dylan Sacramento had an early opportunity and hit the cross bar resulting in a corner, which Nico Samayoa was there to score first goal of the season. Both Miguel Jaime and Chris Clement were credited with the assists on the opening goal of the night.
Shortly after, Jaime was left alone open in front and scored and with less than 13 minutes into the game. FGCU had a 2-0 lead.
The Eagles continued the pressure, as less than a minute later, Sacramento just narrowly misses extending the lead to three, however FIU came the other way, and Paul Marie converted to cut the lead to 2-1.
The nation-leading scorer this season, Santiago Olafsen of FIU, came in with a chance that Gavigan was there for.  The Panthers nearly broke through the defense less than a minute later, but Samayoa raced back for the clear. The Eagles were called for a foul just outside the box after Kareem Riley was issued a yellow card though the free kick went wide.
After Jaime neatly scored his second on a nice passing play, both team’s goal keepers had to make their best save of the game to keep the score the same. Miguel Perez was the latest Eagle to have a terrific scoring chance, but the game remained 2-1 in favor of the home team.  As the chances in the final 10 minutes of the half subdued, the Eagles finished the first half with nine shots.
Out of the halftime break, FIU had the best chance early on, as Paul Marie got free, but Gavigan reached his leg out to make a crucial save. Right after, Shak Adams dangled around a couple of defenders and lifted one over the keeper to extend the lead to 3-1.
The Eagles continued to pressure, as FGCU reached 14 shots on net with a little more than 20 minutes remaining. Perez made a couple of nice moves inside the box, but his shot went wide.
Just like last week versus Omaha, the Panthers got one back late, as Alvaro Alvarez finished a cross and the lead was cut to 3-2.
It looked as though Ruiz was taken down in the box with a little more than 11 minutes to go, but the referee decided to let play on, as Eli Roubos got back to prevent a good scoring chance.
With 5:29, Mohammed Conde was sent off with a red card after Caleb George was tackled just outside the box.
Riley nearly broke through on a breakaway, but he was grabbed at from behind, and the Panthers were fortunate the referee only showed a yellow to Estaban Calvo already playing down a man.
After a foul on FGCU, Marvin Hezel stunned FGCU as Inigo Sagarduy sent a cross to Hezel. His header tied the game with less than 30 seconds left to send the game to overtime.
In overtime, Adams nearly had the winner to begin the frame, but his shot was knocked out from Hugo Fauroux. FIU had its first shot from Sagarduy, which Gavigan stopped to keep the game going as neither team could score in the first overtime.
Just like in the first OT, Adams was once again inches from ending it, but his shot led to an Eagle corner that didn’t turn out. FGCU continued to use the speed of Adams to create scoring chances, as he crossed one that Robert Ferrer rang off the cross bar.
Jaime had another superb chance that was deflected out of play, but the corner could not end it. The Panthers’ corner did as Alessandro Campoy ended it with eight seconds left to win the game in overtime and remain unbeaten on the season.
“It’s really hard to hear FIU sing on our field,” Cormier said. “For me, it really goes to a deep place being an Eagle now and I wanted them to sit there and listen to the excitement they had because I think we granted them opportunity to be excited.”
Up next, FGCU will head on the road to Deland, Florida to take on Stetson, as the lone unbeaten teams in the ASUN will face off on Saturday, Oct. 14 at 7 p.m.