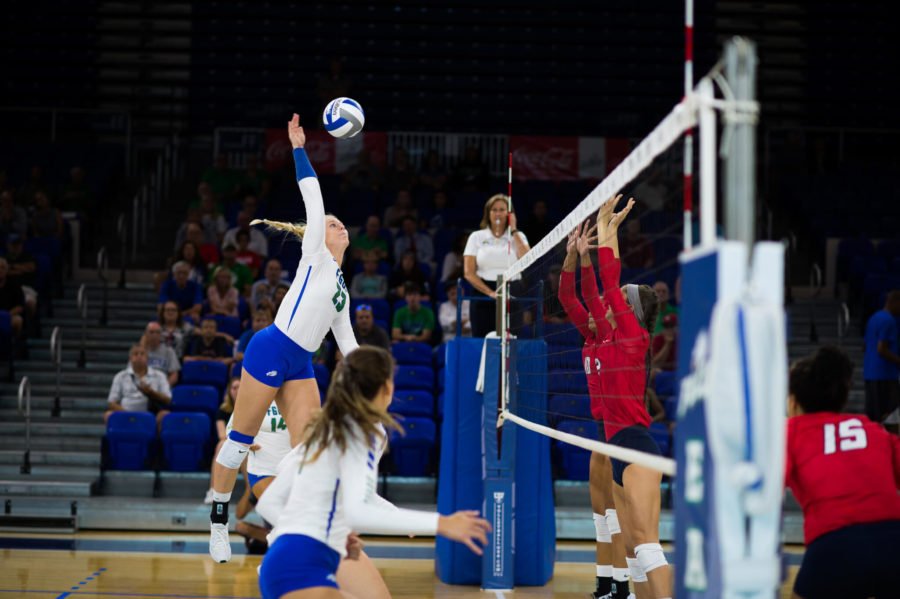 On Saturday night, the FGCU volleyball team defeated the Stetson Hatters, 25-20, 25-14, 25-19. The victory extends the Eagles’ winning streak to an impressive eight games. The ASUN standings have Jacksonville and Kennesaw State still at the top with FGCU.
The Hatters (3-17, 2-6) grabbed three of the first four points in the opening set. The Eagles (17-6, 7-1) went on a couple of runs late in the set, in large credit to Amanda Carroll, who finished with 17 kills on the night, and freshman Snowy Burnam, who had an outstanding night with 12 kills herself. With FGCU leading 21-20, the Eagles closed out the first set with a 4-0 scoring run, thanks to kills from Burnam and freshman Cortney VanLiew.
Stetson scored the first point in the second set, but FGCU raced out to a 6-1 lead, producing six consecutive points. The Eagles continued their offense in the set. Maggie Rick finished the night with 44 total assists, and redshirt-freshman Ciara DeBell finished with seven kills.
The Eagles finished the set on a 4-0 run and took a commanding 2-0 lead in sets heading into break time. Carroll, DeBell, Burnam and Daniele Serrano all produced kills to open the final set.
Tied at 10, FGCU was able to break the game open using a crucial 4-0 run, with two kills coming from DeBell. The Hatters never saw a lead again in the closing set.
Trailing 23-16, the Hatters were able to put together three straight points, cutting the deficit to four, 23-19. However, the Eagles made sure to not let Stetson force a fourth set, as Burnam and Carroll produced kills off assists from Rick, and the Eagles clinched victory number 17.
Next, FGCU will hit the road for its next four games. The pivotal swing begins Friday night in Jacksonville, where the Eagles will take on North Florida, followed by a back-to-back game Saturday night against Jacksonville.