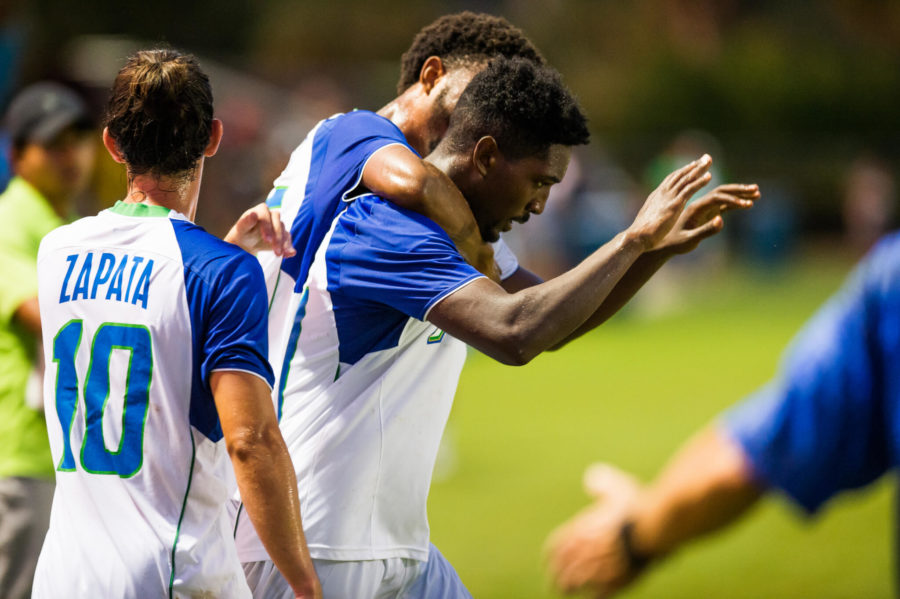 Playing in a crucial matchup with the number two seed in the ASUN Tournament on the line, the Eagles picked up a 5-0 win to secure a first round bye in the ASUN Tournament.
“I thought the guys did a good job concentrating on playing a complete game,” head coach Jesse Cormier said. “It was excellent to have the seniors be honored in a way where I thought the effort was there from the whole team across the board, and that’s the way they deserve to go out. They have done so much for this program and have been so loyal and (are) such (a) good role model. Their legacy is in tact and they can walk away with their chin(s) held high.”
FGCU got off to a quick start with the nation’s leading scorer from last season, Albert Ruiz, going up against this season’s nation’s scorer Mamadou Guirassy. Ruiz got the Eagles off to a quick start with two goals in the first six minutes.
The first one came off a header from Dennis Zapata, which hit the post, but Ruiz was right on the spot to score his first of the day to put FGCU up 1-0. Less than two minutes later, both Robert Ferrer and Preston Kilwien set up Ruiz for his second goal of the match and fourth of the season to quickly grab a 2-0 lead.
The Eagles continued to generate most of the early chances until NJIT gained a corner kick, but it was routinely cleared from the Eagles’ backline. Guirassy had a couple of chances in close late in the half, including breaking free, but his left footed shot went high.
FGCU looked to take a 3-0 lead with Miguel Perez setting up Miguel Jaime for a goal, but the side judge ruled the play offside, so the lead stayed at two.
However, FGCU would get that third goal on a corner kick with Nico Samayoa, finishing off a corner kick for his third goal of the year to put the Eagles up 3-0 heading into the half.
The second half started off very similar to the first half, with the Eagles getting a terrific scoring chance from Sacramento, but his shot hit the cross bar. Ruiz nearly completed the hat trick after his header, but Victor Pujades stopped Ruiz’s chance.
Just a little past the midway point of the second half, Shak Adams fired a shot and scored to pad to the lead to 4-0. For Adams, it was his team-leading sixth goal of the season.
The Eagles finished off a dominating performance, with Lucas Bueno registering his first collegiate goal to make it 5-0 on senior night.
“It was very emotional,” Ruiz said. “It was a game that was hard to focus on the business, but we were able to go through those emotions and focus on the game. I also really wanted to break the fastest hat-trick record in the nation. I was looking for that third one, but I wasn’t able to get it.”
Up next, FGCU will head to FAU to play its final regular season game before hosting the winner of #3 NJIT and #6 Lipscomb in the ASUN semifinals Nov. 5 at 1 p.m. at the FGCU Soccer Complex. The quarterfinal matchup will take place on Friday in Fort Myers as well.