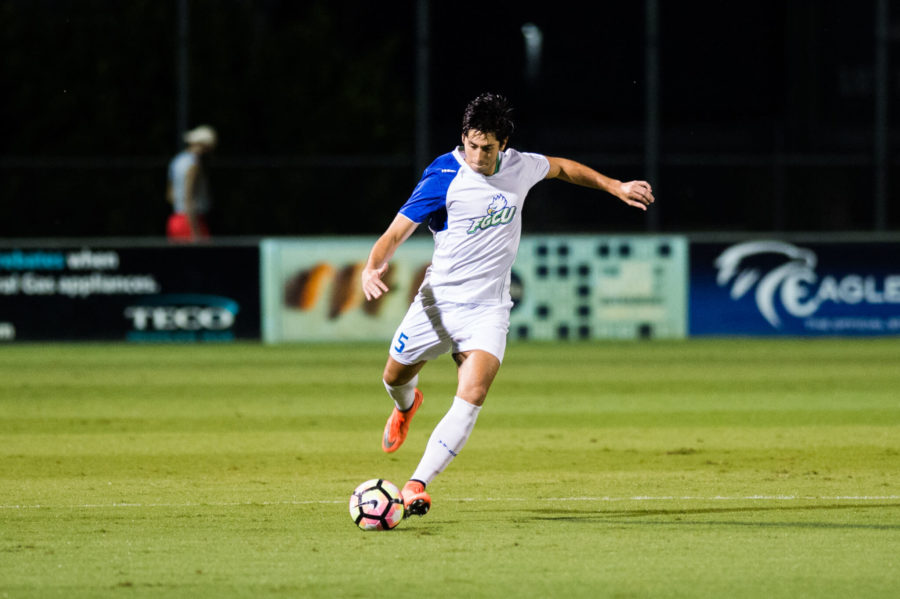 In the final match of the regular season, the Eagles traveled to FAU and came away with a 3-0 to finish the regular season 8-5-3 as they get ready to play in the ASUN Tournament.
Having played just two days ago, head coach Jesse Cormier went deep into his bench getting lots of different players into the action without Nico Samayoa, Dylan Sacramento and Caleb George, who didn’t travel with the team.
“We have some momentum right now,” Cormier said. “The guys are attacking and pressing well, and we have a few key people getting back healthy and fit. We have taken pride in defending these last few matches, and that’s been an obvious component of the success. I’m happy with how we’re taking on all dimensions of the game and not just pieces.”
Just 12 minutes into the match, FGCU got on the board, courtesy of Dennis Zapata’s fourth goal of the season coming off a rebound from a shot from Shak Adams.
Less than four minutes later, Tom Denat doubled the lead with his first goal of the season just after a corner kick. Just over a quarter of the way through the match, FGCU led 2-0.
In net for the first time since coming out versus USF, Connor Gavigan was not tested in the first half with the Eagles’ defense, allowing three shots with none going on net.  Cormier used 18 different players in the first half and three of the seven shots came from the bench from Fernando Ramirez, Jahan Rajaee and Miguel Perez.
The Eagles added their third goal from their leading scorer, Adams, in the 87th minute, as he received a pass from Arion Sobers-Assue to put FGCU up three, which was more than enough for the Eagles, who picked up a non-conference win.
“With leaving some guys at home to rest, we had some other people step up and preform really well tonight,” Cormier said. “TC Anderson and Jahan Rajaee were really good in their roles, and it was nice to see Sobers-Assue get a point. Miguel Jaime also put together a strong individual performance. Overall, it was a good road win.”
The Eagles will await the winner of the quarterfinal matchup of Lipscomb and NJIT to see who they will play on Sunday in the semifinals of the ASUN Tournament. The Eagles outscored those two teams 7-0 in the two head-to-head meetings.