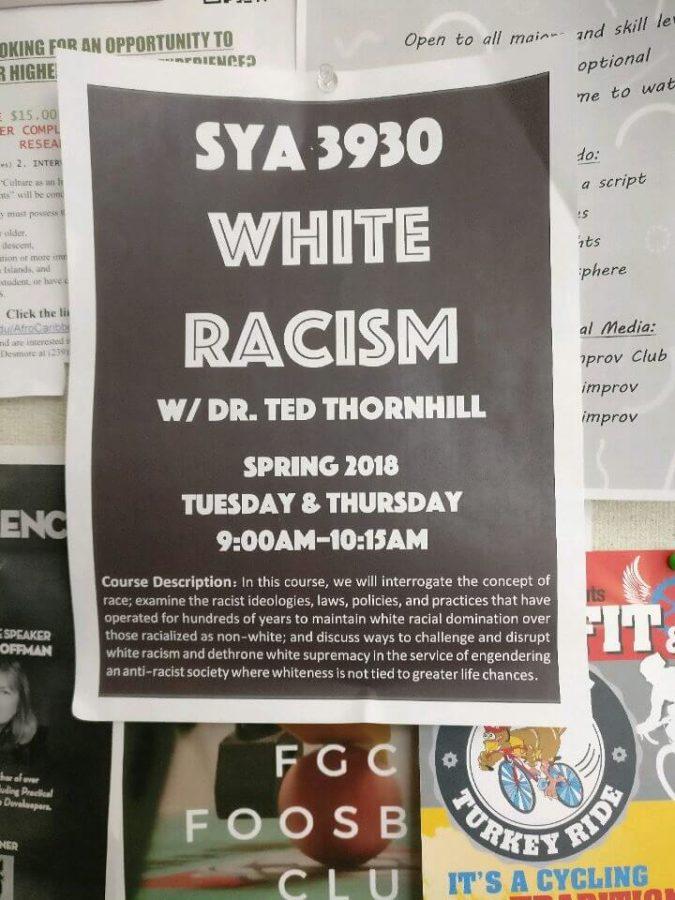 As many students across campus already know, next semester FGCU will implement a class that has garnered some controversary.

The course, titled “White Racism” (SYA 3930), which will be taught by assistant professor of sociology Ted Thornhill, has the student body and surrounding communities seemingly in an uproar.

The class has so much debate surrounding it that it has warranted news coverage in local stations like NBC2 and has made its way to national coverage in The New York Post. Despite being surrounded by such a heated debate, the course has managed to fill all 50 available seats and the waitlist.

“I’m actually really interested in it as a class, if I had the course space for it I would definitely take it.” Emma Ramseyer, a history major said.

Some of the class’s supporters say that it just needs a new name because “White Racism” can be viewed as biased. Others say the title is fine just the way it is.

English major Gabriela B., who declined to give her full name for fear of retaliation, says many people think racism is a thing of the past, but she herself has experienced modern racism, that many view as a joke but has implications today.

“I understand why he utilized the title the way he did, but it does have negative connotations,” Gabby said. “I think it’s a very interesting idea to raise awareness, and I think that’s what this course is trying to do, is raise awareness, of how issues in the past are still effecting us today.”

Opponents of the class are crying “But I’m not racist!” and are telling stories of being called a racial slur that originates from a position of power, taking to social media to express their distain. Some of them are saying that the course, judging just by the description, is brainwashing material.

“I’m assuming it’s going to be biased one way, and centralized on America and it would be interesting to see what it goes over,” Lillian Blackmon a history major said. “I’d love to see the syllabus, that’s for sure.”

This course is not attacking white people, or brainwashing any students that choose to take it.

“My White Racism course is not anti-white; it is anti-white racism,” Thorn- hill said in a statement to Eagle News. “Clearly, not all white people are racists; some are even anti-racist.

This course is exploring the fact that, according to Pew Research Center, whites account for 81 percent of the current Congress while at the same time representing only 62 percent of the population.

According to The FGCU Office of Institutional Equity and Compliance, FGCU is a school where diversity is embraced, and diversity is part of its mission statement.

There are also Affirmative Action plans that were in place in 2015 and 2016 and available for viewing on the FGCU website.

Despite these statements and efforts, the problem remains that according to a 2013 survey, 67.43 per- cent of FGCU’s student population is white.

This class creates an opportunity for white people to play victims with their white guilt, and for white supremacists, who have been emboldened this year by the Trump administration, to once again crawl outof the woodwork.

With the controversy surrounding this class, it can be easy to forget how important it is that this class is available. Even if, as a society, there have been racial advancements, many opportunities remain open to white people through no merit of their own, while these same doors remain closed to racial minorities.

Denying these facts and the importance of this class is to remain ignorant.