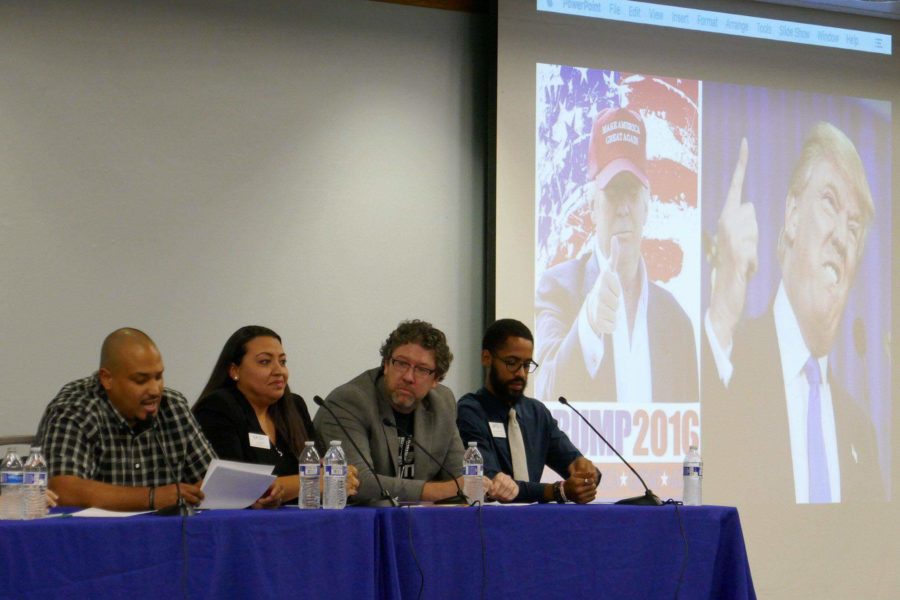 On Thursday, Nov. 9, the Cohen Center ballroom was filled almost to capacity as over 300 students, faculty and members of the public gathered to listen in on a panel discussion covering topics that have been the source of national and campus controversy over the last few months.

The panel discussion, titled “Race, Immigration, and White Supremacy in the Post-Obama Era,” was jointly sponsored by the Office of Community Outreach and the sociology program as part of The Community Speaks lecture series.

The panel addressed a variety of racially charged topics that have been taking place across the country in the months following President Donald Trump’s election.

The panel discussed current events ranging from the violence in Charlottesville to the Trump administration’s response to Puerto Rico in the wake of Hurricane Maria.

The panel discussion comes after a series of racial incidents on campus.

Last year, a racial slur accompanied by a drawing of a lynching sparked protests across campus in response to the FGCU administration’s slow handling of the event.

In light of these events, the Office of Community Outreach organized the panel to initiate discussion of events taking place in America and at FGCU.

“For most, when I say the words ‘white supremacy,’ it conjures images of the Ku Klux Klan, neo-Nazis, skinheads, and, most recently, the Alt-right. While that wouldn’t be an inaccurate conception, it would be an incomplete one,” Dr. Ted Thornhill, a professor of sociology, said in his presentation on race in America.

“Rather it is the seemingly non-racial organizational policies and practices and whites’ color blind and post racial fantasies that ensure whites maintain their dominant position in American society. Racial hatred is not a prerequisite of white racism.”

To increase racial sensitivity at FGCU, Thornhill said, “You have to [be] comfortable losing a little face. You have to get comfortable being uncomfortable, because folks of color feel that way all the time.”

Thornhill’s presentation touched on many of the ideas that his class “White Racism” (SYA 3930) will cover next spring.

Thornhill’s class made national headlines last week when it was first announced and has sparked mixed reactions on campus.

“I think the White Racism course will open up the dialogue,” Kayla Pigoia, a sociology major who is enrolled in Thornhill’s class for the spring semester, said. “I want to learn more and help those who can’t speak. Like the panel said, the more you educate yourself, the more you can make a difference.”

Pinero’s presentation also covered the rescission of DACA, which prevents universities from acting as sanctuary campuses for undocumented immigrants.

According to a report done by the News Press, there are an estimated 67 DACA students at FGCU.

Earlier this week in Tallahassee, the judiciary committee passed a statewide anti-\ immigration bill which requires law enforcement agencies to enforce federal immigration law, with a daily penalty of 5,000 dollars for state entities, including universities, who do not comply with DACA’s rescission.

“For all DACA students at FGCU,” Pinero said. “We stand with you.” Following Pinero, Dr. Jan Meij, Assistant Professor of Sociology and a dual citizen of the United States and the Netherlands, gave a presentation on the rise of the Alt-right movement and the beliefs associated with the movement.

“I can’t call Trump a white supremacist,” Meij said. “I can’t look into a man’s heart and know if he is a racist, but I do know that Trump has emboldened certain racist groups.”

Alt-right has been making headlines since their participation in the Charlottesville protests and since Richard Spencer, who is a member of the Alt- right movement, spoke at University of Florida last month.

“It’s not good enough for whites to say ‘I’m not racist, so this doesn’t involve me.’ Our silence makes us complicit in white supremacy,” Meij said.

“The majority of universities in the state of Florida are predominantly white institutions,” Hartley said. “So long as the research tells us that those racialized as black folks are having a vastly different experience as those racialized as white folks, we are going to keep pushing the agenda.”

In his presentation, Hartley explained that although the 48 percent of African Americans attend college, just five percent below the rate for whites, there is still a vast chasm in attrition rates between African Americans and whites.

The lack of strong relationships between black students and white professors, coupled with bias from peers at school and at home, all contribute to the high college dropout rate.

“I am less concerned about us as a people being on the same page, but we at least have to be reading the same book,” Hartley said. Michelle Bissainthe, a psychology major and sociology minor, agreed with Hartley’s points.

“It’s true what Ashton was saying. I do go into a classroom and am one of the only black students there. To make FGCU better, I want all of the closeted racists to come out and sit down with facts, plain facts, and talk honestly about racism and why they feel that way.”

At the end of the presentations, the audience was able to submit questions to the panel. One question that was asked was how racism can be combatted at FGCU.

“We all have to be part of the fight,” Hartley said.

“Everybody in this room, everybody not in this room. [Events] like this shouldn’t happen in a vacuum. We can push the envelope and push the needle every single day. You might not see the change in your life time this battle will be forever, and that’s okay. Just don’t get tired.”