The man behind the megaphone 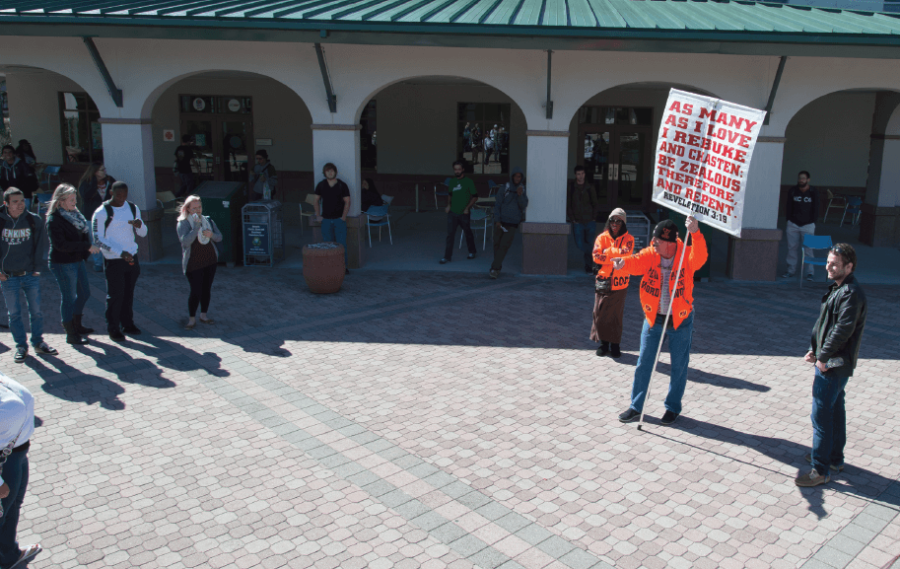 Students gather around the preacher on campus to hear him speak. EN Photo/Andrew Friedgen.

With a megaphone in hand and a banner in the background that reads “Jesus Saves,” Adam LaCroix and his team are not easily ignored and have become a part of FGCU’s culture.

His message is constructed around Christianity and spreading the word of God, and students and faculty often hear about eternal damnation.

To some, LaCroix’s message may sound harsh and inexcusable, but to LaCroix, his preaching is the most important work in his life.

“Without the understanding of the danger people are in [eternal damnation], according to what the Bible says, they’re not going to be able to understand their great need for forgiveness,” LaCroix said.

According to LaCroix, his messages tell of love, patience, righteousness and charity. The goal —outside of teaching Biblical moral values — is to change the minds of nonpracticing Christians to save their souls from damnation.

LaCroix refers to his method of preaching as “confrontational Evangelism.” According to LaCroix, it is a very effective method “and the Bible says it’s the best way to evangelize.”

LaCroix is a founding member of TeamJesusPreachers, an organization originally founded by a man known as Brother Israel.

Together, LaCroix and Brother Israel run a YouTube channel amassing about 13,000 subscribers that support their work from around the nation.

Team Jesus Preacher’s headquarters is in Fort Myers, and LaCroix says it is comprised of seven to eight members, including LaCroix. LaCroix says he travels from coast to coast to preach, having gone as far as Las Vegas and New York City.

When he’s not preaching, LaCroix tends to his remodeling business and enjoys spending time with his wife.

But LaCroix wasn’t always a preacher holding signs that warned onlookers of burning in an eternal hell.

There were several turning points along his journey that made him change his outlook on life.

According to LaCroix, before becoming a born-again Christian, he indulged in a life of sin. LaCroix said he excelled in academics, sports and bodybuilding in high school, which made him extremely popular, he said.

In college, excessive drinking, drugs, partying and the pursuit of women left him with what he describes as a “void in his heart.”

According to LaCroix, he sold drugs and he ended up dropping out of Michigan State University and later got arrested with four felonies.

The arrest became his first turning point, he said, and he began to pray.

With time, LaCroix said he managed to get his life back together. He ended up marrying his wife and followed the path of sobriety for three years, in which he married his wife and started his business.

His life took a darker turn when he ended up in the hospital with nothing left but faith.

One day, LaCroix went to a pool hall and choked on a swig of beer and was rushed to to the hospital, where he fell into heart failure.

He said he was in the hospital fighting death for six months, resorting to prayer to save his life. He vowed to turn his life around and preach the word of salvation if God saved him, he said.

According to LaCroix, doctors were certain he would not make it, but he did and he took true to his promise. Afterwards, he worked as a prison chaplain helping felons find faith.

Turning point number two: According to LaCroix, after the incident, he began to pray and apply himself to Evangelism, which helped heal his marriage, he said.

In this time, he also says he recuperated his business, acquired success and has been clean for the past eight years.

In present time, he is preaching his message of the Bible through his controversial methods.

This method isn’t without its dangers. LaCroix said he and his team have been threatened and physically hurt. There was also an instance where someone attempted to kill him, he said.

“One time, I was trapped in a house with man wielding a machete,” LaCroix said. “Prayer got me through that.”

With a distant smile, LaCroix recollected the event in what seems like a distant memory. When questioned about his own safety, he said he was not afraid because of his belief in Jesus.

“Believing in Jesus is the only way, turning to a power greater than us in the only way to rid ourselves of a life of sin,” he said.

In concluding his thoughts when questioned about how a non-believer could begin praying, or what is the best method of prayer, “Best way to pray,” he replied with a glimmer in his eye and a grin on his lips, “Repentance.”