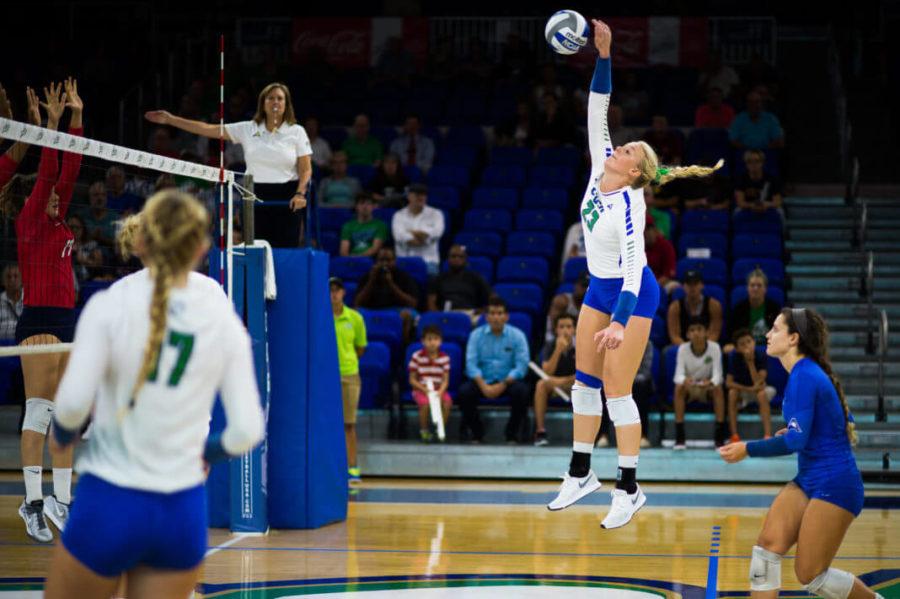 Following a 3-0 win over No. 6 USC Upstate, the No. 3 FGCU volleyball team swept No. 2 Jacksonville to advance to the ASUN Championship for the second year in a row.
FGCU and Kennesaw State will each look for its program’s first ASUN championship and the place in the NCAA Tournament.
“I think it looked a little bit like yesterday where there was a gradual improvement from set to set,” FGCU head coach Matt Botsford said. “A lot of positive things. Snowy was fantastic and Amanda did a great job coming through attacking wise. I think our blocking and our serving dictated a lot of the match. That’s a good foundation to build on, but we’re going to have to be super aggressive tomorrow to be in a position to get an automatic bid to the tournament.”
ASUN Player of the Year Amanda Carroll led the way with a double-double, finishing with a game-high 18 kills along with 17 digs and a .375 hitting percentage.
ASUN Freshman of the Year Snowy Burnam finished with 13 kills and 11 digs, while Maggie Rick continued her assist total to 1,195, tallying 34 in the match alone.
The first set went back and forth before kills from Carroll, Burnam and Cortney VanLiew allowed the Eagles to take the first set, 25-20.
The second set started in favor of FGCU, but eventually ended with a 26-24 victory.
The third and final set was the strongest set for the Eagles, hitting at a percentage of .400 collectively. As play continued, Jacksonville tried to fight back, but back-to-back kills gave the team a 25-21 set victory and a 3-0 match victory.
This win secured the Eagles’ spot in the ASUN Championship for the second year in a row. FGCU then took on No. 1 Kennesaw State in the ASUN final Saturday night. Unfortunately, the Eagles were unable to come out victorious, falling to Kennesaw 0-3.
“Ultimately, we just couldn’t get the stops we needed,” head coach Matt Botsford said. “Kennesaw’s offense was firing, and then when you get to the third set their blocks started to work, which was really the difference. The defense and blocking made it difficult for our hitters heading into the third set and we couldn’t extend the match.”
Amanda Carroll led with a match-high 15 kills and a team-high 15 digs. She averaged 17.3 digs per match during the tournament.
Snowy Burnam finished the match with eight kills, eight digs and five blocks. Cortney VanLiew had the second highest hitting percentage of the match of .385 with five kills. Maggie Rick finished with 32 assists.
The first set was back and forth the entire time, but the Eagles couldn’t compete with the Owls’ strong hitting percentage of .302. FGCU dropped the first set in a close 25-23, the closet of the match.
From the first set, KSU continued its dominance and jumped to an early 4-1 to start the second set.
Despite a strong hitting performance from Carroll and Burnam, the Owls pushed through the Eagles’ blocking and defense, taking the second set 25-22.
In the third set, Kennesaw came out strong, opening the set with an 11-4 lead. The Eagles were unable to stop the dominance of the Owls, both offensively and defensively.
FGCU made some headway toward the end of the match, but the set ended 25-17 in favor of the Owls and a 3-0 match win, sending Kennesaw State to the NCAA Tournament.