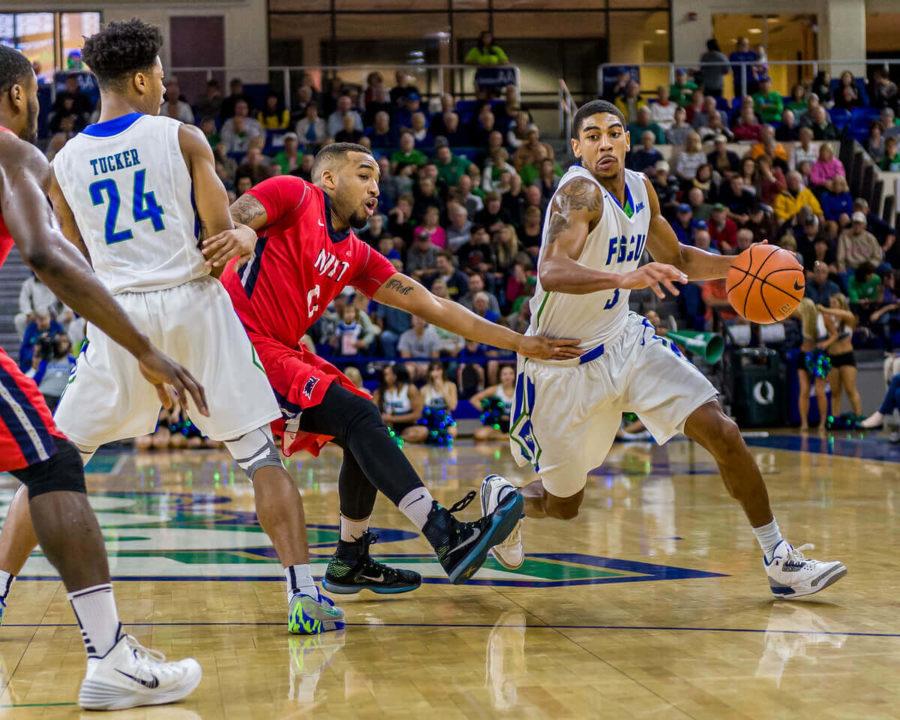 For only the fourth time since FGCU has been in division one, the Eagles dropped their consecutive home non-conference game, as the FAU Owls stunned FGCU after carrying an 11-point lead in the second half.
The Eagles gave up 58 points in the second half, which is by far the most this season, as FGCU moves to 6-4 on the season. Brandon Goodwin had a game-high 23 and four other Eagles were in double figures on the night. However, the Owls got 9 or more points from the only six players to score for them to lead them to victory.
Despite leading in points in the paint, a spot where the Eagles led the country last season, they committed 23 fouls, which resulted in 33 free throw attempts, compared to FGCU who had 22 and only hit 12 of them.
“We got a lot of work to do,” head coach Joe Dooley said. “The clock’s ticking and we we’re not very good. Our effort on the defensive end leaves a lot to be desired. We’re going to learn that very quickly.”
With the Eagles using their sixth different starting lineup of the season, Gerdarius Troutman had five early points for FAU for an early lead. They got in front by five, but Dinero Mercurius’s first three and a bucket from RaySean Scott tied the game at 13.
Antravious Simmons’ lay-up and Mercurius’s second three put FGCU in front for its largest lead at four midway through the first quarter.
Shortly after, the Owls got even, but Brandon Goodwin went on a 6-0 run himself to put the Eagles ahead 29-23. As a team, FGCU went on an 13-0 with Goodwin getting to the rim to increase the lead to 36-23 at halftime.
Like the beginning of the first half, the Owls started off strong on a 5-0, but Goodwin ended that with a field goal to stop the mini run. However, the Owls went on another 5-0 after a turnover on an inbounds pass, which led to a three from Troutman that forced Dooley to call a time out.
Troutman then hit another three and fouled, picking up a four-point play to tie the game at 53. A few moments later with the Eagles up 3, Christian Terrell knocked down his first three to increase the lead back to five, but as they had done all night, the Owls scored five unanswered to tie the game.
FAU took its first lead since early in the first half at 69-67 and soon would go in front by seven on Justin Massey’s third three-pointer of the game.
As the teams traded baskets for a bit, Terrell hit a three to regain the lead for FGCU. The Owls continued to get to the line and scored four straight, grabbing a three-point lead with a little more than three minutes left.
After another
Eagles fall to FAU for second straight loss
foul was called on an FGCU three-pointer, the Eagles hit two more free throws and were in the lead by three. Justin Massey then hit a three and FAU went up 90-85.
The Eagles got a chance to tie it at 90, but Terrell’s floater would not go, and the Owls hit the ensuing two free throws, hanging on to win 92-88.
“I’m surprised with our effort and just our focus throughout the whole thing,” Terrell said. “To be honest with you, we suck right now. Our defense is not where it needs to be at all. We just need to find someone to rebound, someone to guard the ball.”
After a long home stand, the Eagles will head to UT Arlington on Saturday, Dec. 9 at 3 p.m. for a matchup with the Mavericks, looking