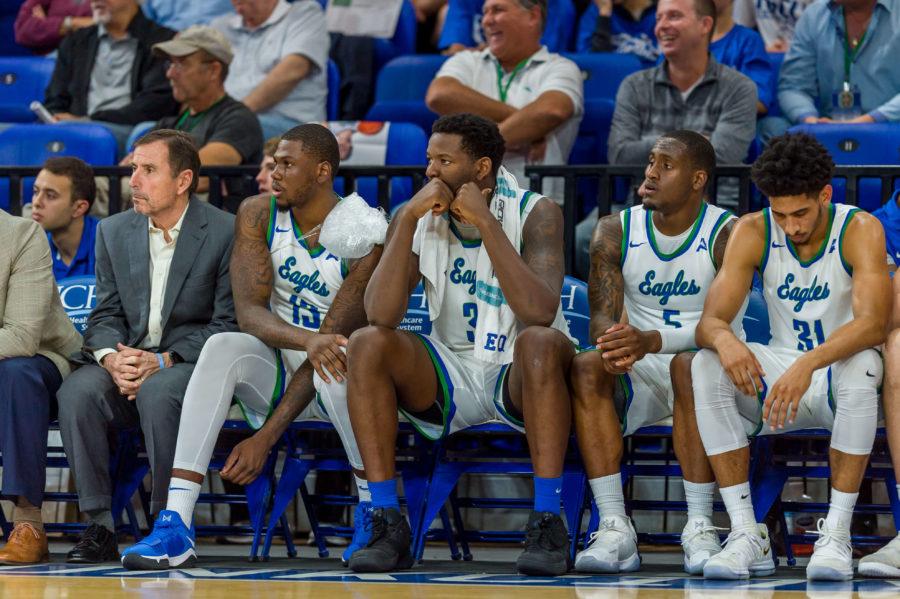 In the last game before the Eagles hit the road for a three-game run, the FGCU men’s basketball team suffered a disappointing 83-64 loss to Oral Roberts Saturday night.
With a slow start and inability to recover all night, the Eagles recorded their third-straight home game loss.
“Oral Roberts were the aggressors all game; they had more energy, and energy finds the ball,” FGCU head coach Joe Dooley said. “It was an abysmal performance by us, partly created by them and partly created by us. I apologize to our fans – they shouldn’t have to put up with watching that type of performance.”
Offensively the team was led by Brandon Goodwin, who had 20 points and five assists. Christian Terrell totaled 14 points, which was highlighted by four three-pointers.
In his debut with the Eagles, Michael Gilmore tallied 10 points while also securing four rebounds and two assists.
FGCU shot 44.4 percent from the floor and made a season-high 11 three-pointers.
Their lack of in-paint points and turning the ball over 16 times was what really affected the Eagles and their success. FGCU led the nation in points in the paint last year, but Oral Roberts finished with 58 to FGCU’s 22 in paint points.
Also, Oral Roberts’ 40-20 advantage on the glass and second-chance points were big downfalls for FGCU.
Starting slow and with no energy, the Eagles quickly got themselves into a 14-point deficit in the first half.
Though FGCU was able to cut the deficit to four in the second half, the team was still unable to get things rolling on both sides of the ball.
Despite getting themselves into a 14-point hole, the Eagles’ offense started to flow once Gilmore came off the bench. This allowed the deficit to be cut to seven, going into halftime 42-35.
Goodwin tallied 16 points in just 14 1st-half minutes on 6-8 shooting and 3-5 from three-point range.
A big three from Dinero Mercurius with 13 minutes left in the game closed the gap to four. However, that was the closest the Eagles were able to get the rest of the game.
Next, FGCU will travel to Miami to take on FIU Tuesday, Dec. 19 with tipoff at 7 p.m.