Lisa Zderadicka: The journey to the Nest 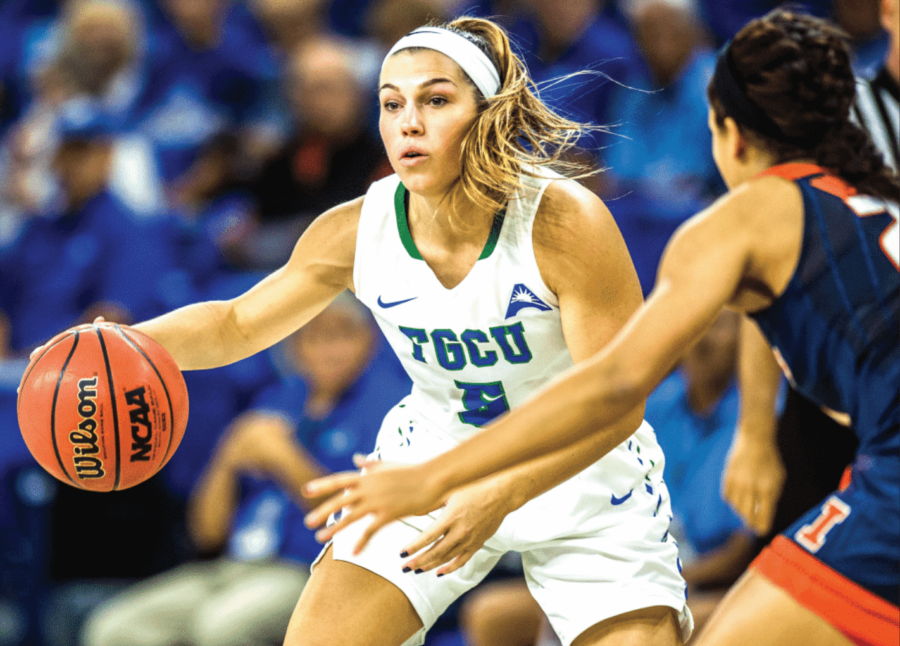 Lisa Zderadicka, or most known as Lisa Z by Eagle fans, has made an immediate impact with her new team.
The 23-year-old grad-student, who still has a year and a half of eligibility remaining, isn’t just your average college basketball player. Born in Austria, Zderadicka has been playing basketball for as long as she can remember. However, the transition to living in the United States and playing basketball has been a challenge.
“It has been hard to be away from friends and family,” Zderadicka said. “The language was difficult in the beginning because I speak German at home. We learned English in school, but it is different when everyone talks fast and uses slang. Everyone thought I was just really shy and didn’t know what to say, but I just had to translate everything in my head first.”
She grew up in a basketball family and played with her two older sisters in a women’s league, and she even competed together on the U18 and U20 Austrian National Team. Her father was her coach when she played for BC Vienna 87 where Zderadicka was a six-time MVP and an eight-time Austrian champion. Unlike in the U.S., where players play for their school, it is common for players to play for a club team, as basketball is not connected to schools.
Not only is she thankful her father was able to coach her for some time, she really appreciates her family for letting her move to the states and continue her passion of playing basketball here where she says it is much bigger than where she is from.
Though she spent a lot of time winning, she suffered her first major injury while playing high school basketball in Austria when she had the first of three surgeries on her left knee. It was also the first of two torn ACL’s she had, which took her out of basketball for a year each time with the first one being her junior year of high school.
After spending all of her life in Austria, Zderadicka made the long trip to the United States after graduating from high school and started her career at Houston Baptist. In her first season there in her third game, she suffered her second torn ACL and sat out for a year.
After three years in Houston, Zderadicka made her decision to transfer to FGCU with the help of a former Eagle.
“I played with the national team at home, and we played against other countries and I got to know Anthi (Chatzigiakoumi) from Greece. She played here before and I got to learn about the school. When I figured I wanted to transfer, that school came to my mind again.”
It has been a major adjustment for Zderadicka while playing at FGCU. The offense is completely different from any other offense she has ever played for, and it was an adjustment for her during the beginning of the year to get used to all the new terminology that Karl Smesko uses. She believes it is much more physical than it was back home.
“I believe we spend a lot more time on conditioning and strength than back at home. Here you get your scholarship for basketball, and it is your main focus next to school, but at home, basketball is a hobby for most people. You can’t get the whole team to do extra conditioning and stuff like that.”
Through her first 12 games with the Eagles, Zderadicka has been coming off the bench, but is seventh on the team in scoring with 90 points in 13 games. She has been in double figures three separate times, including her season-high of 13 points in the Eagles’ win over #20 Kentucky.
She doesn’t have just the attention of fans, but also from her coach, who has been very happy with her play.
“She is a really talented player,” Smesko said. “She is a really smart player and it gives us some options at point guard, which is very important. Even at the end of a game you have to have someone who can handle the ball at the end, so Lisa is in. She has been a big lift for us and she is making a big impact for us.”
Zderadicka also works just as hard in the classroom. She studied interdisciplinary studies in undergrad and now studies educational leadership as a master. Zderadicka hopes to continue her collegiate career strong, as well as pick up her masters at FGCU.