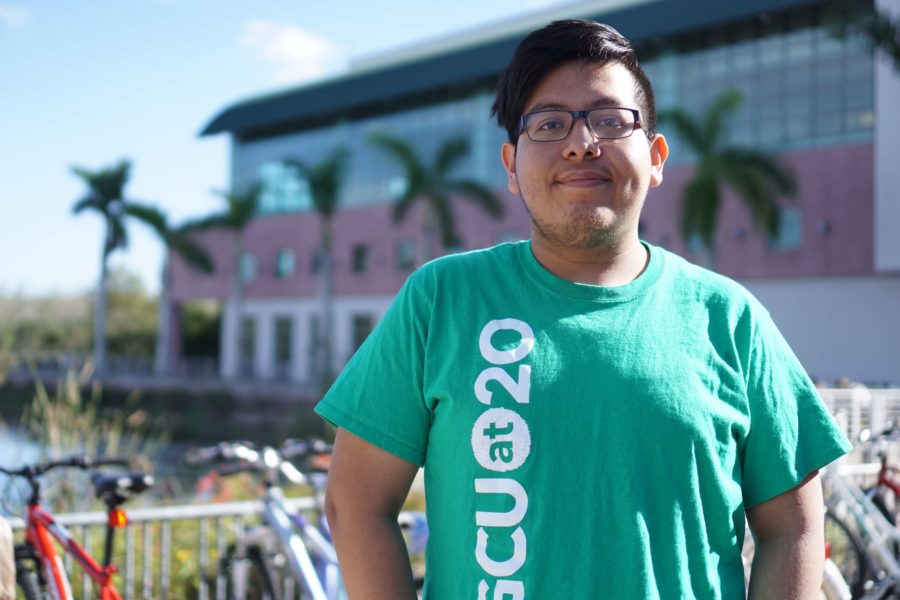 If you were to one day wake up in a country that you knew nothing about — didn’t speak the language, didn’t understand the culture, and didn’t know anyone there — what would you do?

FGCU freshman, Isaac Alonso, has been asking himself this question over and over again the past couple of years.

“To call it scary is an understatement. It’s like trying to think of infinity. You just can’t process it,” Alonso said.

Though for many this may be a far-fetched idea, for Alonso, this hypothetical inches closer and closer to reality every day. Since Alonso was brought here from Mexico by his parents when he was 1-year-old, the FGCU freshman is a recipient of Deferred Action for Childhood Arrivals, otherwise known as DACA.

After first immigrating to America, Alonso’s parents stayed in California for about a month, but eventually moved toward family in Southwest Florida.

Having planned on only staying in the U.S. for a few years, the Alonsos ultimately ended up not being able to pass up the seemingly endless opportunities, especially compared to the life they left behind in Mexico.

Alonso has attended school in Immokalee since pre-K and had been in the gifted program since 2nd grade. Though Isaac was not born in America, his brother, Abiel, who is less than 2 years younger than him, was.

“We have the same mom, went to the same schools, and had basically the same extra-curriculars, but he technically has more rights than me as an American.”

After Alonso and his family first heard about DACA in 2012, it gave them “a nice little bit of hope.” Though, when Alonso became eligible and applied for the program around the age of 15, he faced quite a few bumps in the road along the way.

Alonso’s family was told that the best way for them go about sending an application to the Department of Homeland Security would be to use an immigration lawyer. Except, “it wasn’t easy nor cheap,” Alonso said. “He was the only immigration lawyer in town and anything else would’ve be far out of our price range. He was literally our best and worst option.”

Despite the fact that the first application they sent in actually got sent back because of multiple mistakes made by the lawyer, they wound up being successful at the end of the day.

However, on Sept. 5, 2017, in a statement made by Attorney General Jeff Sessions, the Trump administration rescinded “the program known as DACA that was effectuated under the Obama administration.”

While framed as a six- month phase-out, the new guidelines still allow for certain DACA enrollees to remain in the program and retain work permits well beyond that date.

For those whose eligibility is set to expire within the next six months, DHS had been accepting renewal applications until Oct. 5 — creating the potential for enrollees to remain in the program almost two years after the so-called phase-out. Anyone whose permit ends on March 6, 2018, or later will simply see their DACA benefits end at that time — unless they had previously applied for a renewal.

Luckily, Alonso was one of the fortunate few who were allowed to remain in the program. This, however, came with more hurdles to jump. Just like the first go-around, the immigration lawyer accidentally left out an entire page of the application. Alonso recalls his mom calling him in early October after she got the envelope from DHS about his renewal application being rejected.

“It was now past the deadline and I remember sitting there on my couch with my mom trying to figure out what to do. We thought that was it— we thought I wouldn’t be able to do anything because that would mean my driver’s license was expired, my scholarships were in jeopardy, and I wouldn’t have been able to work the two jobs I have. Basically, everything would have been over.”

Alonso is a first-generation college student and a merit scholar studying bio-engineering. He was accepted into each major state university in Florida, but chose to come to FGCU because its sense of unity.

“I don’t think I’ve ever been in a situation [at FGCU] where the people around me weren’t automatically friendly, nice or welcoming,” Alonso said.

Student Government Senator Reynerio “Joey” Muradaz, whose goal is to better facilitate campus discourse on issues like immigration, met Alonso through a mutual  friend in Leadership Through Service. “He’s the nicest guy. After the first or second time I met him, he mentioned in passing that he was a DACA student, and I think he’s rather brave for being vocal about it.”

Alonso admits, though, that his bravery hasn’t come without some trepidation. His mother always raised him to be cautious around the police, but never knew why. It wasn’t until he was about 7-years-old that it all clicked.

“There were police officers stationed around an elementary school in my community checking people’s I.D.’s. They ended up deporting a lot of these kids’ parents, and that’s when it sunk in that, that was my reality for the rest of my life. If I were deported, that would mean my life is over. What my parents did for me is over, and the life they left behind would be pointless.”

Last Spring, Student Government passed a resolution calling on the university to work toward adopting a sanctuary policy. This would enable FGCU to abstain from corresponding with federal authorities, allowing students like Alonso who are DACA recipients to attend college without fear of their scholarships being revoked. According to Admissions, there are about 60 to 67 DACA students enrolled at the university. Student Government plans to continue working with FGCU faculty on creating concrete solutions for ensuring its students a wholesome education.