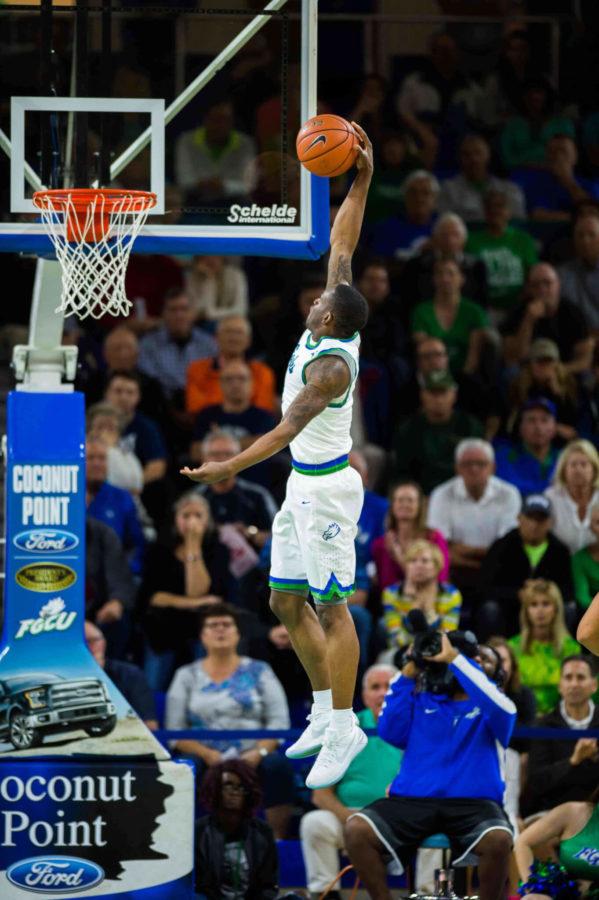 Up against the #11 team in the country, Wichita State, FGCU was right in striking distance throughout the game but was unable to pull off the upset, resulting in the Eagles’ seventh dropped game of the season.
It was a slow start for the visiting team, who has now lost five of their last six games, but they managed to erase a 13-point lead in the first half and went into the break only down by two. They would get a seven-point lead in the second half, with the Shockers being too much for the Eagles to handle.
Brandon Goodwin finished with a team-high of 20 points, with only five coming in the first half. However, Zach Johnson hit four three-pointers in the first half and finished with 19.
“I thought during crunch time, they (Wichita State) made some big plays,” said head coach Joe Dooley. “We got to the rim and didn’t finish a couple. We were up and got a little inpatient offensively, which we have had a tendency to do. Obviously, when you’re on the road against a team of their caliber, you can’t make the mistakes that we did.”
Michael Gilmore, in only his third game with the Eagles, hit an early three for the first bucket of the game,  but Wichita State scored seven straight until RaySean Scott ended that run with a score.
As the first half went on, fouls started to bug the Eagles, and, as Gilmore picked up his second, the Eagles were called for 23 fouls compared to the Shockers 14 in the game.
Late in the first, FGCU went on a 6-0 run and only trailed 35-33 at the half, and right out of the break, the Eagle claimed their first lead since the opening minutes as Goodwin broke through for a lay-up to give FGCU a 45-43.
It would end up being a 13-0 for the Eagles to claim their largest lead of the game, but Wichita State quickly tied the game up after a missed lay-up from the Eagles and a three from the Shockers.
The teams would trade buckets, and it would be tied at 61 with four minutes left, but the Shockers finished the game on a 14-4 run to get the win.
FGCU will head to Rhode Island on Wednesday, December 27th at 7 p.m. after the Christmas break, and the Eagles will look to stop their three game skid in a couple of home games before ASUN plays kicks off.