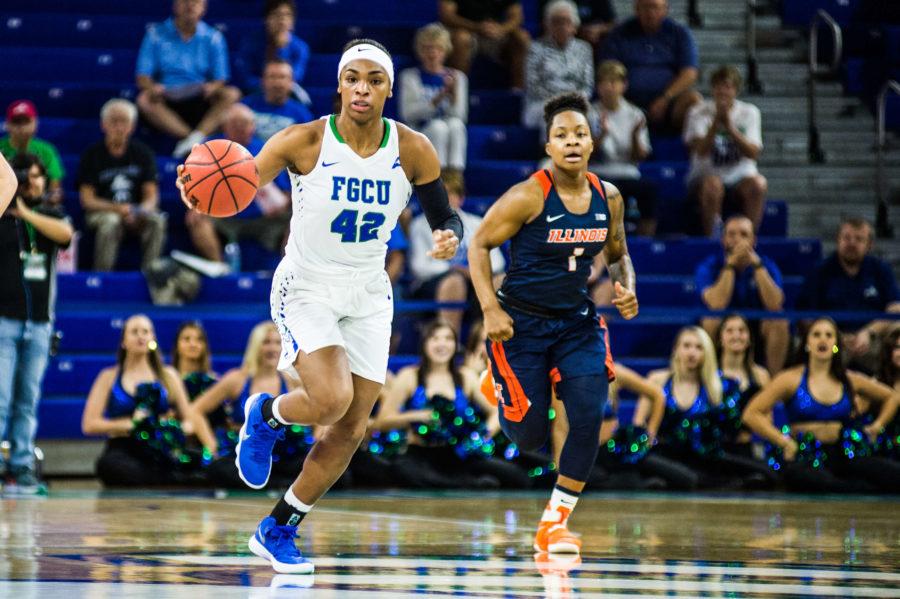 After a 14-3 start to the season in the non-conference part of the schedule, the FGCU women’s basketball team will begin ASUN Play as the top Mid-Major program in the country.
FGCU reached as high as No. 3 last week after they defeated No. 2 ranked Belmont at home on Friday and Green Bay lost to Northern Kentucky. Now, the Eagles are awarded the top-spot. It is the fifth time FGCU has been tabbed with this honor.
“It is always nice to be recognized as one of the top mid-major teams,” said head coach Karl Smesko. “(However), there is a long way to go and a lot of improvement that needs to be made.”
So far this season, FGCU is ranks No. 19 in RPI and has wins over two ranked opponents this season in No. 20 Kentucky and No. 21 DePaul.
Rosemarie Julien, who was picked as the Preseason ASUN Player of the Year, currently leads the Eagles with 12.9 points per game and two others in Taylor Gradinjan and Nasrin Ulel average in double-figures.
Coming off the beach in all but one game, China Dow averages 9.9 points a game and is currently shooting her best percentage from the three point line. Dow is only behind newly added Lisa Zderadicka and redshirt senior Jessica Cattani, who leads the team at 46 percent from behind the arc.
On the defensive end, FGCU averages a little over 62 points a game allowed and has held teams to under 42 percent from the field this season. Tytionia Adderly leads the teams in rebounds with 146 in 17 games.
Earlier in the season, Gradinjan eclipsed the 1000 point mark in her FGCU career and Zderadicka and Cattani both reached over 600 and 400 career points respectively in their careers.