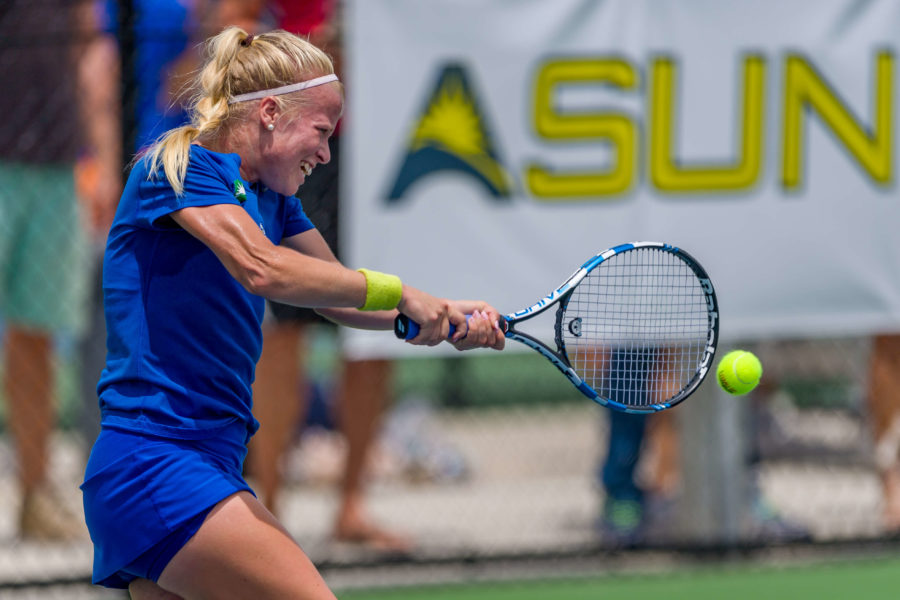 The FGCU women’s tennis team will host its annual three-day FGCU Spring Invite. Play is set to begin Saturday, January 13th and conclude on Monday, January 15th at the FGCU Tennis Complex.
The teams participating in this invite will be South Carolina, Denver, Rice, Ole Miss and Kansas.
This will be the first time the Eagles will play since November when they competed in the Dick Vitale Invitational. There, Julia Ascúa’s back draw singles title highlighted the invite.
South Carolina last competed in the Kitty Harrison Invitational where Carolina picked up 10-11 matches the first day and six matches the two remaining days.
Denver last competed in the Brown Classic, while some players competed in the ITA Oracle National Fall Invite.
Rice last competed in the River Oaks Invite where the first day the Owls won 8 out of 9 matches, sweeping Texas and North Texas.
Ole Miss comes into this invite ranked No. 23 in the first Oracle/ITA Tennis Rankings of 2018. The Rebels return five of the top six from the 2017 season, including seniors Arianne Hartono and Natalie Suk, and freshmen Sabina Machalova.
Kansas last competed in the Tiger Fall Classic in November. There, the team finished with three singles wins. Maria Toran Ribes, Tatiana Nikolaeva and Carla Pons Martorell led the way for the Jayhawks.
Next, the Eagles will head to Boca Raton to take on FAU Wednesday, January 24th with play beginning at 11 a.m.