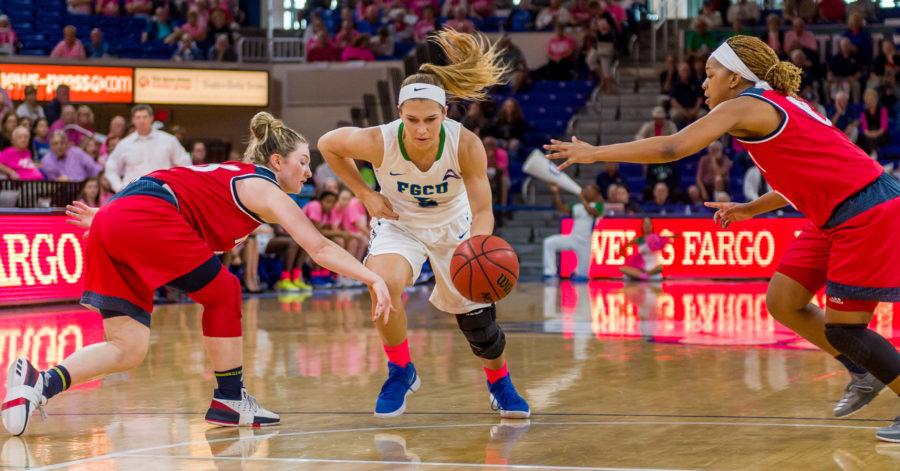 The FGCU women’s basketball team secured their second ASUN win over NJIT Saturday night with a 90-66 victory.
This win also marks its season-best winning streak at six for the Eagles.
Jessica Cattani led the team offensively with 16 points, shooting 5-for-8 from behind the arc. Meanwhile, Erica Nelson, Nasrin Ulel, Rosemarie Julien and China Dow each added 13 points.
“Almost every time she was open, she knocked down a shot,” FGCU head coach Karl Smesko said about Cattani’s performance. “She was a big spark to the offense. We shot the ball ok, not great from three, and that made it a competitive game for a long time.”
FGCU forced 24 turnovers from the Highlanders, which led to 25 points in favor of FGCU. The Eagles also offensively out rebounded NJIT, 10-3 leading to an 11-5 advantage in second chance points.
Play was back and forth the first six minutes of the game and the Eagles even trailed by one with four minutes left in the quarter.
However, the Eagles’ 7-0 run put the team on top ending the first quarter 20-11 in favor of FGCU.
Going into the second quarter, FGCU dominated offensively and stretched the lead even more to 17 points going into the half.
FGCU continued its lead going into the second half and led by as many as 31 following a layup from Dow with 3:50 left in the third quarter. The Eagles led by at least 20 over the game’s final 16 minutes.
Ulel added three rebounds, three steals and an assist, while Julien had a rebound, an assist, a block and a steal. Dow led the team with eight rebounds along with an assist and a steal.
Zderadicka finished with seven assists and two rebounds, while Gradinjan finished with eight points, two rebounds and two assists.
Cattani is now 23-for-40 (.575) from the 3-point line and has scored at least one three pointer in the past eight games. She has also reached double digits in five of the last eight games for an average of 12.6 per game.
Next, the Eagles will host USC Upstate Monday, January 15th at 7 p.m.