The unfiltered dream of MLK 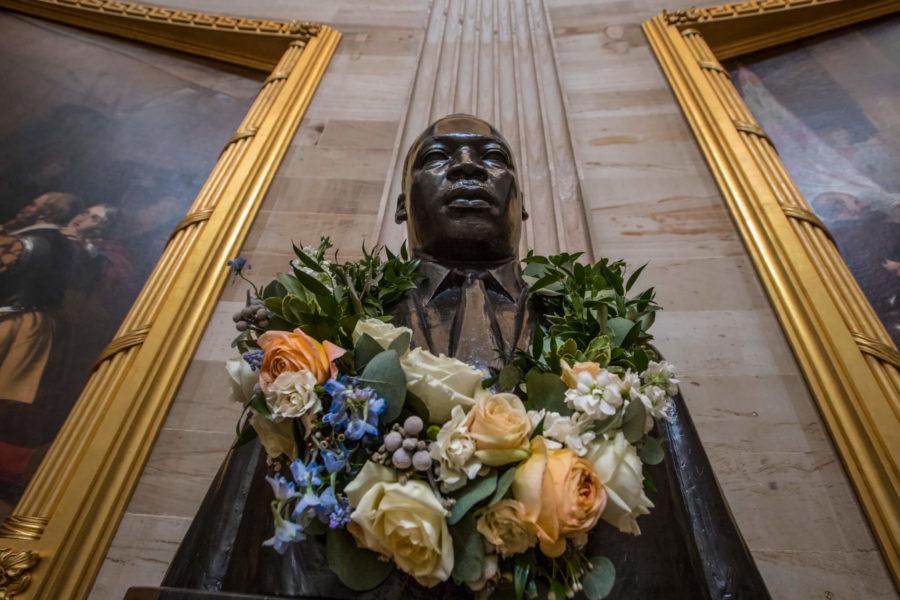 (Photo courtesy of the AP Exchange)

This past Monday, Jan. 15, was Martin Luther King day, the first the country has celebrated under the not-so-subtle racism of President Trump, and that makes this day and King’s legacy all the more relevant.

King was a man whose leadership was fundamental in bringing millions of African Americans and other minorities into the spotlight of representation and discourse, not merely as a silent workforce, but as fully-realized, vocal citizens capable of contributing to the nation’s most important issues.

The surname “King” is, by all accounts, fitting considering King’s larger-than-life presence and importance. He manifested the best adjectives one would choose when describing a noble, wise and powerful king.

King also could be compared to a saint, not because he was without sin or fl aw, but because when anyone faces a lifetime of frustrations, it’s somewhat expected for them to let impatience and other negative emotions to arise and overtake them. So, in rather saint-like fashion, King’s message didn’t stray from his stance against violence and hatred.

If he had failed to do so, it would be forgivable because that’s what normal humans do. We too often succumb to our worst selves when hardships arise. Overcoming those issues requires the patience, wisdom and perseverance, qualities more often than not found mostly in holy people, like St. Francis and even Jesus.

These celebratory things I wrote about King aren’t by any means a novelty. They are said every year. While it’s vital that King be celebrated, that shouldn’t be the focus. He didn’t want to be regarded as some mythological hero.

Usually, figures moved by a no- ble cause, like King, Gandhi and Nelson Mandela, don’t want recognition or prizes. They want their goals of their causes fulfilled in their entirety. That’s why they don’t deter or surrender. And that’s also why they can’t be bought.

King had a dream, that much the whole world knows, but our politicians, and even the mainstream media, seem to filter sections of it to the public.

In their narrative, it almost seems like King’s goal is fulfilled. If that were the case, then why does inequality persist? Why is the gap between rich and poor widening?

Instead of gushing about King, the media and the government should do their best to materialize the dream he had. A dream we all share. It’s revolting to see Fox News and people like President Trump,

Mitch McConnel and Paul Ryan celebrate King. If he were alive, they would demonize him. In fact, back when King was alive, he was persecuted and intimidated by both the media and the government. Not just right-wing, but also the mainstream and leftist media. He was a lone voice in the wilderness, standing up for things that were right.

For instance, in 1967 more than 168 newspapers, including the New York Times and the Washington Post, denounced King for vehemently criticizing the war in Vietnam and for calling the United States “the greater purveyor of violence in the world today.”

After that, President Johnson immediately terminated his relationship with King.

And even to this day, there’s a side of King the whole of society rarely talks about. He was very critical of America and its government, a proponent of anti-imperialism and was a committed democratic socialist; a political stance personified nowadays by Bernie Sanders.

King said, “there must be a better distribution of wealth, and may- be America must move toward democratic socialism.” Republicans and many Democrats would faint hearing that, especially from a beloved figure.

King also said that “(…) I am not so opposed to capitalism that I have failed to see its relative merits (…) [but] today capitalism has outlived its usefulness. It has brought about a system that takes necessities from the masses to give luxuries to the classes.”

But that part of his legacy, which would make his dream of a more egalitarian society feasible, is practically swept under the rug.

These days, it’s easy to get be- hind King’s message of equality and non-segregation when that has become the norm.

In my view, Martin Luther King’s legacy becoming a holiday caused a collateral effect in which people semi-consciously believe that his dream came true.

Wake-up call, America, this isn’t the same as Fourth of July where the war is over, England is no longer a threat and the Declaration of Independence is signed.

There’s not an act, or law, or a few decades that will solve them.

Thus, let’s move past the superficial, though important congratulatory words. Let’s celebrate King’s legacy in the way he would’ve been proudest of: by relentlessly fighting for what’s right despite overwhelm