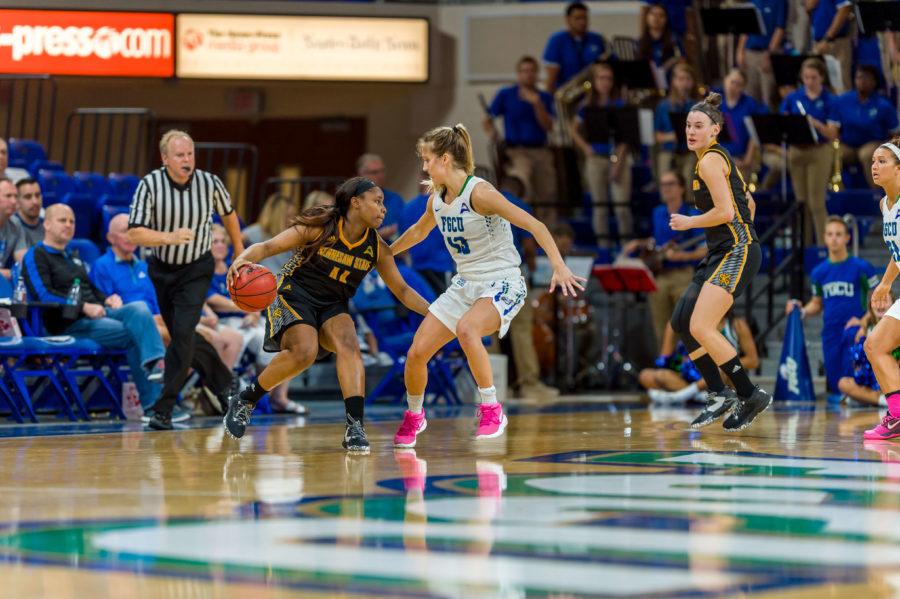 The FGCU women’s basketball team continued its dominance on the floor as they clipped Kennesaw State by a score of 78-57. With the win, the Eagles are on an eight-game winning streak.

“We had a good start, but had trouble maintaining our intensity,” FGCU head coach Karl Smesko said. “Ty, Rose and Lisa had great games [to help us get the win].”

Early on, Julien went 3-for-4 from the field and with China Dow’s six points, the team was able to take the 20-8 lead.

However, it was a different story in the second quarter. FGCU shot just 7-for-19 from the field, including a 1-for-10 performance from 3-point range.

Going into halftime, the Eagles were ahead 35-24.

In the third quarter, both teams combined to shoot 16-for-34 from the field as FGCU scored 25 of the 47 points.

Despite shooting fairly low, the Eagles were able to extend its lead to 14 after Gradinjan’s 3-pointers.

Early in the final quarter, Julien picked up one of her two steals, while Jessica Cattani finished with a three after an offensive board from Tytionia Adderly.

The dominance continued in the following minutes, pushing the lead to 20 at one point.

Sophomore Tytionia Adderly did not score any points in the game, but contributed with 10 rebounds (nine offensive and one defensive) three assists and one steal.

With her nine offensive boards, Adderly now has 181 career offensive rebounds and is only three away from surpassing Courtney Chihil (183) for seventh all-time.

Redshirt senior Taylor Grandijan finished with 12 points, nine rebounds, two assists and one steal. Grandijan remains third all-time in career 3-pointers made with 265 and is 29 away from surpassing second all-time in 3-pointers.

Off the bench, Lisa Zderadicka finished with 11 points, three rebounds, one assist, one block and one steal. China Dow finished with 10 points, four rebounds and three assists.

For the Owls, freshman Kamiyah Street led the way offensively with a double-double of 14 points and 10 rebounds, one assist, one block and one steal.

Carlotta Gianolla had 15 points, four rebounds and one assist.

Up next, the Eagles wrap up its two-game road trip as they travel to Nashville to face Lipscomb on Monday Jan. 22 at 7:30 p.m.