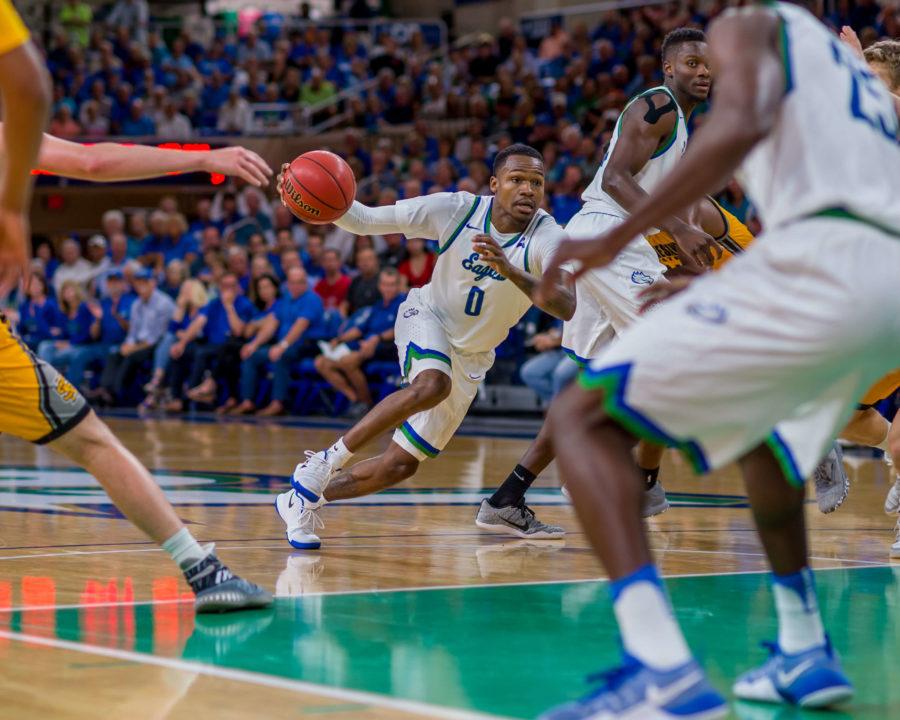 The FGCU men’s basketball team continues its long run in conference play as they defeated Kennesaw State by a score of 66-49.
With the win, the Eagles enter a seven-game winning streak.
“We put together one of our best defensive efforts of the year, and we really needed it because we didn’t play great on offensive,” FGCU head coach Joe Dooley said. “But any time you can go on the road and hold a team under 50 points you’ve done a great job.
Leading the charge offensively for FGCU was redshirt senior Brandon Goodwin. Goodwin finished with 18 points (7-14 FG, 3-6 FT), three rebounds, two assists and one steal.
In addition to his 17 points, Goodwin became the 10th FGCU player in program history to reach 1,000 career points.
Zach Johnson finished with 17 points (6-13 FG, 5-7 FT), six rebounds, four assists and four steals.
After a slow offensive start, FGCU trailed 16-12 with under eight minutes remaining in the opening half.
Led by a Goodwin, the Eagles went on a 14-2 run over the next five minutes to create a 26-18 lead. The lead continued as FGCU went into halftime ahead of the Owls 32-24.
The Eagles limited KSU to just 33.3-percent shooting (8-24) from the floor while finishing at a 43.3-percent clip (13-30) in the first.
To begin the second half, FGCU went on a 10-2 and turned its nine-point advantage into a 17-point cushion, 49-32. This lead continued for the Eagles, making it hard for the Owls to fight back.
For the Owls, three of their players fouled out during the game, two in which were in the starting rotation.
Tyler Hooker and senior Nick Masterson finished with 11 points each. Hooker added three rebounds and one steal before fouling out while Masterson added three rebounds, two assists and one steal.
With the win, FGCU is now 17-6 against Kennesaw overall.
Up next, the Eagles will wrap up its three-game conference road trip traveling to Jacksonville to face off against UNF on Wednesday, January 24 at 7 p.m.