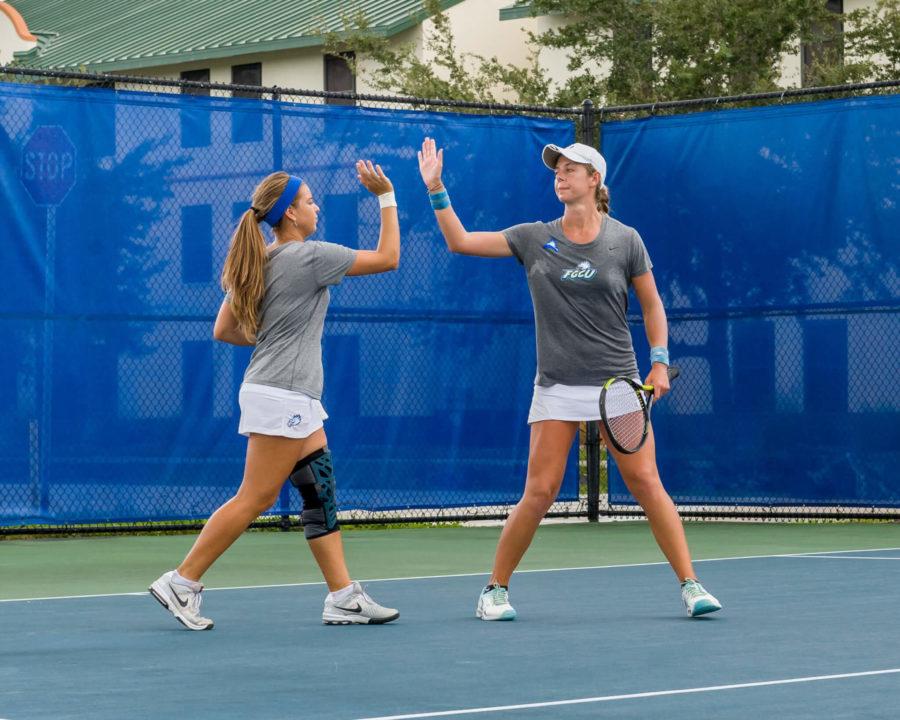 Trailing 3-0 in their first dual match of 2018, the FGCU women’s tennis team came back with a 4-3 win over FAU on Wednesday.
This is the first time the Eagles erased this kind of deficit since the 2011-2012 season when the Eagles came back and beat conference-rival Stetson. FGCU did not earn a point in the doubles match, but got one victory and then one four of the six singles matches to earn the win.
“These women are strong,” head coach Courtney Vernon said. “I am very proud of the fight and focus everyone showed. They stuck to the plan even though we were down 3-0 and they were determined to come back. It was a neat experience to a part of. We are looking forward to getting home and getting back to work tomorrow.”
After losing doubles points, Julia Ascua fell to the No. 2 player in the country Aliona Bolsava 2-6, 0-6. Laura Falceto Font dropped her match in straight sets, and the Eagles fell behind 3-0 with only four singles matches remaining.
However, the Eagles first got a victory from Maja Ornberg 6-1, 6-3 over Natalia Boltinskaya in No. 2 singles. Shortly after that, Sofia Perez won her match 6-4, 6-4 over Kristen Thomas while Patricia Villar earned her second win of the day after a second set tiebreak as well winning doubles with Falceto Font.
The lone remaining match of the day came from freshmen Madison Gallegos, who was in a tight battle, but prevailed in three sets 6-2, 4-6, 6-3 to earn the decisive win and the final point for FGCU.
The Eagles will look to improve to 2-0 on Sunday, February 4 when FIU comes to Fort Myers for the first home dual meet of the season for FGCU.