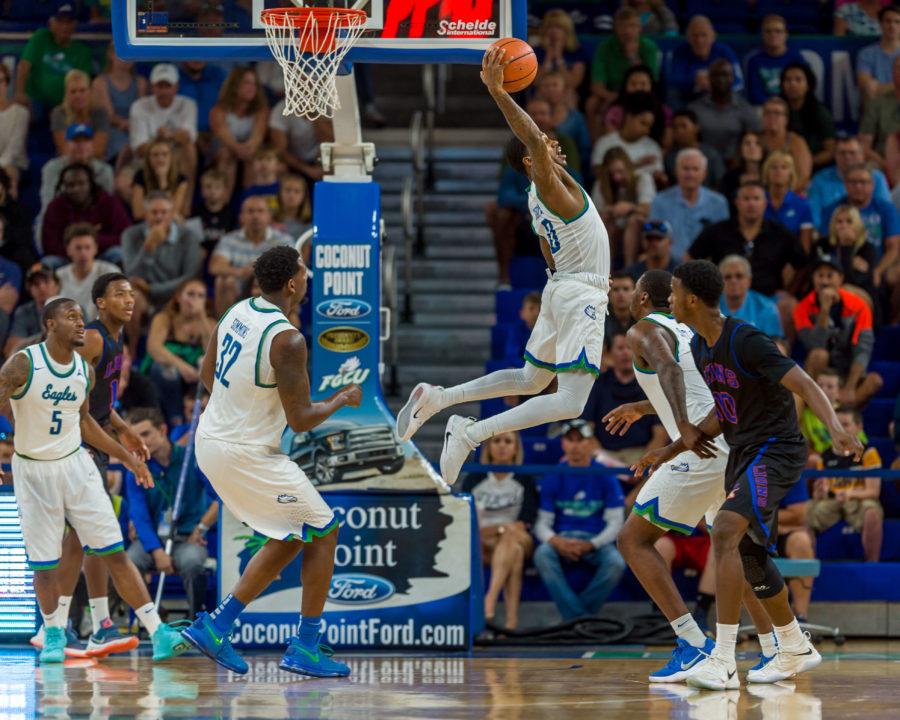 Without FGCU’s leading scorer Brandon Goodwin and staring center Ricky Doyle from suspension, as well as RaySean Scott from a concussion, the FGCU men’s basketball still managed to pull of the road win over UNF 96-87.
The trop of players the Eagles missed have combined to make 40 starts and average over 30 points a game, FGCU had big time performances from a pair of guys who stepped up in Christian Carlyle and Brady Ernst.
Carlyle had 17 on six for 10 shooting from the field, and Ernst added 10 points in 20 minutes of action. The leading scorer for the Eagles was Zach Johnson, who had 19, but if not for the 34 points off the bench from the Eagles, the outcome may have
not been the same.
“It felt good to come home in front of family and friends and I knew we had a couple of men down, so I needed to step up,” Carlyle said. “I just wanted to be aggressive, attack the rim and play good defense and we got the win.”
It was a dominating first half for the Eagles offensively, as they shot 60 percent in the first half and scored the most points this season against a Division 1 opponent with 53.
Despite UNF bringing the deficit to three on a couple of different occasions in the second half, FGCU picked up their eight consecutive victory, as they outscored the Ospreys 56-26 in the paint.
“We came out with a lot of energy, and we talked about playing the right way, which for the most part we did,” head coach Joe Dooley said. “We got a little flustered in the 2nd half at times, but we responded to a few UNF runs which we knew were going to come very well.”
The game started with Christian Terrell connecting with Michael Gilmore for an alley oop for the first points of the game. The Ospreys came in shooting a lot of threes and struggled early, but the turnovers from the Eagles kept UNF right with the Eagles.
Dinero Mercurius had three early triples and after a Zach Johnson dunk, the Eagles had a 28-21 lead over UNF. Shortly later, Johnson had a couple of mid-range baskets, and after a steal after on one of his jumpers; he threw down his second dunk of the game to open up a 10-point lead for FGCU.
The Eagles would end the half with another dunk from Ernst and took a 12-point lead into the locker room.
As a team, the Ospreys attempted 25 in the first half and got 29 of their 41 points from either behind the arc or a the free throw line in the first half.
The start off the second half did not go well for the Eagles, but Gilmore had six early points in the half, as UNF brought the lead to single digits despite missing their first six threes of the second half.
FGCU brought the lead back to nine after Johnson converted all three free throws after being fouled on a three and then threw down a monster dunk to bring the led back to nine.
“All week we talked about getting it inside and pounding the glass,” said Gilmore. “We wanted to slow down the tempo and pound it inside and make sure we had a force inside the paint.”
Up next, FGCU will return home for a pair of games with the first one coming on Saturday, Jan. 27th at 7 p.m. with a matchup with Jacksonville, who currently sit in second place.