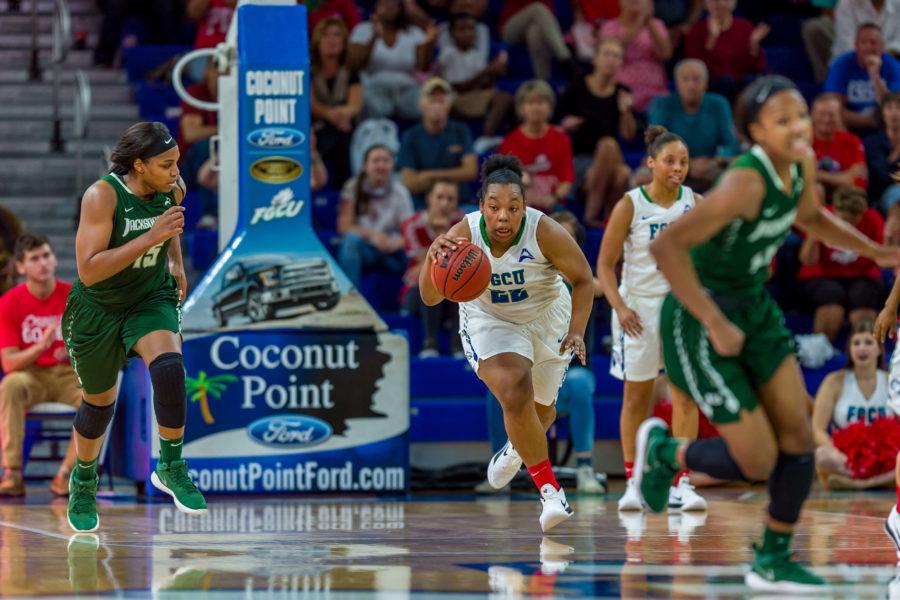 With first place on the line between the lone remaining unbeaten teams in the ASUN conference, the FGCU women’s team defeated Jacksonville 63-58 and sit in first place alone.
With under two minutes to go, the Dolphins trailed by three but missed four straight free throws and had three chances at tying the game at 61 with a trio of three pointers. Theycould not tie the game and ended up missing their last five threes. FGCU would hang on for the five-point win following a pair of Erica Nelson’s free throws.
The Eagles were led in scoring by Nelson, as she scored nine of her 14 points at the free throw line. FGCU more than doubled the Dolphins in free throw attempts with 31 compared to Jacksonville’s 15.
Three others scored in double figures for FGCU in Nasrin Ulel, Rosemarie Julien, and China Dow. The Eagles played all but five minutes without leading rebounder Tytionia Adderly, who took a whack to the face in the first quarter and did not return.
“It was a very tough game,” head coach Karl Smesko said. “It was probably the most physical game we’ve played all season. I thought Jacksonville played with a lot of energy. They played very physical. We got fortunate that some of their best players got in foul trouble and we got fortunate they missed some foul shots down the stretch, but we feel good about beating a good team despite getting beat on the boards.”
It was a tight early game early on as the Eagles and Dolphins were trading baskets early on. After Dow came in off the bench and Jacksonville’s best player, Jasmine Brown, picked up her third foul, Dow erupted the crowd with a three point play and a corner three to give FGCU an early 13-8 lead.
“When we needed a three, we came in clutch with it,” Dow said.
Jacksonville responded after a bunch of fouls were called on the Eagles to take a lead late in the first quarter, but Nasrim Ulel gave the Eagles a one point lead after a three pointer in the final minute.
The Eagles opened up a six point lead after Dow knocked down another three but before the half would end, LaKaris Salter banked a three pointer home as time ran out in the first half with FGCU up 32-31.
The Jaguars shot the ball a little over 44 percent from the floor and without Adderly, they were outrebounded 23-11 in the first half. They would eventually outrebound the Eagles 42-19 in the game.
Jacksonville started the second with four early points to take the lead for the first time since the early stages of the game, but Taylor Gradinjan converted a three point play to tie the score at 35.  Nasrim Ulel soon after hit a three and Lisa Zderadicka made a lay-up to give FGCU the lead once again.
Julien doubled that lead as the shot clocked expired with an NBA three pointer to push the lead to six. After a technical foul was called on the Dolphins, Julien converted both her free throws and Nelson was fouled after the technical and she knocked down both her free throws for a four-point possession. The Eagles went into the final frame up nine after Nelson made a three as timed expired in the third quarter.
The lead expanded to 10 to start the quarter, but the Dolphins scored five straight.
They would continue to fight back into the final two minutes down by three, but FGCU would hang on for the five point win thanks to a strong couple of minutes from Nelson.
“I just try to do everything my teammates need me to do,” Nelson said. “If it is scoring that night, I try to do that. If it is stopping their best defender, I just try to do everything they need me to do.”
With a highly anticipated rematch coming on Feb. 3 in Jacksonville, the Eagles will have one game in between them as they face off against UNF on Thursday, Feb. 1 at 7 p.m.