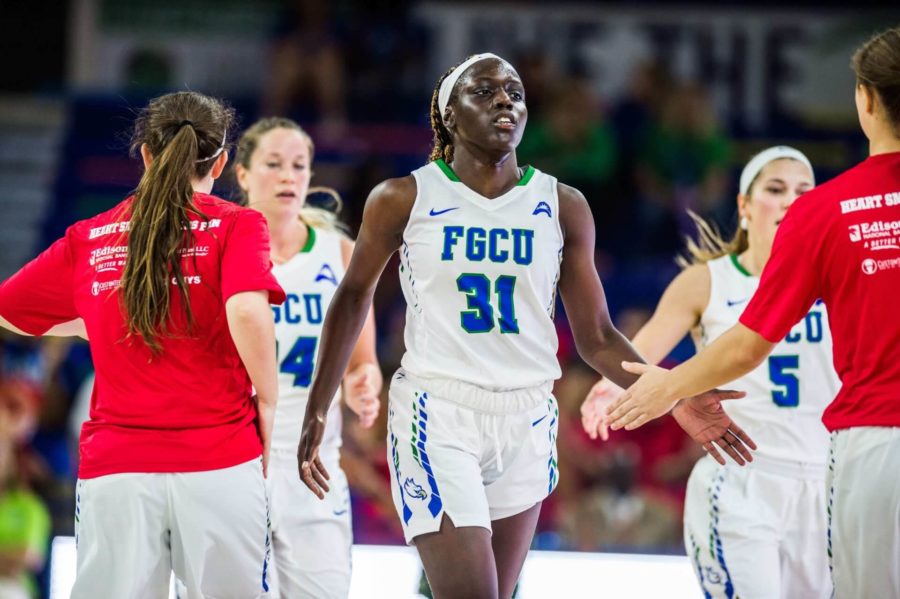 Coming in as the top-ranked mid major team in the country, the FGCU women’s basketball team has cracked the top 25 in the USA Coaches Poll for the first time since the 2014-2015 season.
The Eagles have a perfect 6-0 record in conference play and currently sit at 20-3 on the season. Both the men and women’s teams are the only school in the nation that has both teams unbeaten in conference.
FGCU received 40 votes, which was only 14 votes shy of Oklahoma and are higher ranked than former National Champion Stanford as well as ACC schools and other top schools such as N.C. State, Virginia, and Marquette.
So far this season, the Eagles have beat two ranked opponents in DePaul and Kentucky, as well as mid major powerhouse South Dakota State and have an RPI in the top 20 before starting conference play. They currently sit at 33 and have received three votes in the AP poll for the second straight week.
“It is great to be recognized as a Top 25 team,” FGCU head coach Karl Smesko said. “However, we have a very important week in front of us, and we need to stay focused on the task at hand.”
Currently, the ASUN Preseason Player of the Year Rosemarie Julien leads the team with 12.8 points per game. They also have three other players averaging in double figures in China Dow, Nasrin Ulel, and Taylor Gradinjan.
Tytionia Adderly, who had to leave last game vs. Jacksonville after getting hit in the head, averaged 8.4 rebounds to lead the team and is questionable for the upcoming road trip where FGCU will face UNF and a rematch versus Jacksonville.
Smesko will be coaching in his 600th game for the Eagles on Thursday, as hehas been the only coach in program history and will look to extend the nation’s ninth longest winning streak to 11 at 7 p.m. before heading to Jacksonville on Saturday at 1 p.m. as the top two teams in the conference face off.
In the last meeting, FGCU won 63-58 at Alico Arena and have beaten the Dolphins in 21 of 24 career meetings.
Should the Eagles be able to win the conference tournament, as they were projected to prior to the season, it would be their fourth appearance in the NCAA Tournament in the last five years. The lone year they did not appear, they were the runner-up in the NIT.