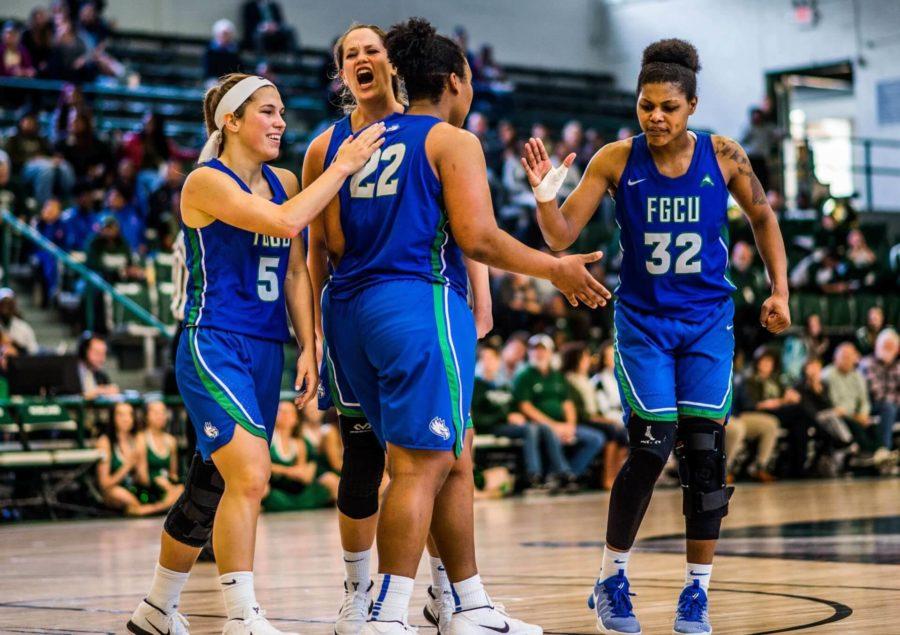 In a battle for the top-spot in the ASUN standings, the Eagles shrugged off a rare conference loss and moved back into sole possession of first place with a 65-63 win over Jacksonville.
This win gives them a one game lead over the Dolphins, including the tiebreak, with six games remaining in ASUN play.
The Eagles had a two-point lead prior to Jacksonville getting one last possession with less than 35 seconds to go. Erica Nelson forced a turnover and was able to run out the clock after being fouled with two seconds to go.
China Dow came one point away from her season high of 26, going four for six from behind the arc. She had 20 points in the first half and made six of seven from the line for FGCU.
FGCU only shot 36.1 percent from the field and even less from the three but made their first 14 free throws, which helped neutralize the Dolphins who out-rebounded the Eagles 42-31. The Eagles were without leading rebounder Tytionia Adderly for the second straight game.
“I thought the intensity was excellent,” head coach Karl Smesko said. “We were competing. We were pushing. After we got the lead, Jacksonville made a strong push on us. I was just happy to see us make enough plays down the stretch to win the game.”
In a very tight first half with both teams leading for spurts, a late three-pointer at the buzzer from Dow gave FGCU their largest lead of the first half with the Eagles going into halftime up 40-37.
The Dolphins started the second half on a 9-0 run holding FGCU scoreless for the first 3:06 of the third quarter. Jacksonville opened up with a 46-40 lead, but Dow’s three-point play brought the Eagles back within three.
Some strong defense from FGCU forced Jacksonville to turn the ball over late in the third on multiple possessions, which allowed the Eagles to go take a four-point lead into the final quarter after a 16-6 run.
The Eagles led by as many as nine in the fourth quarter and were able to pull out the win despite Jacksonville’s late run in the final minutes.
“We have first place in the conference now,” Nelson said. “We just have to secure home-court advantage. That’s the biggest thing – not coming back to another place and being able to sleep in our own beds.”
Up next, FGCU will come home for a rare home game when they take on UNF again on Tuesday at 7 p.m.