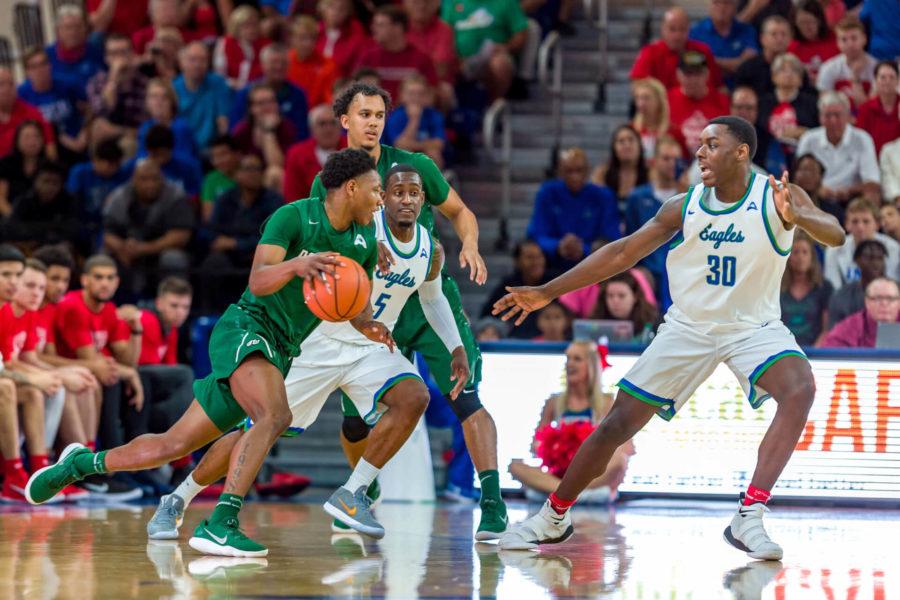 The FGCU men’s basketball team remains perfect in ASUN conference play, soaring to an 80-55 win over Jacksonville Saturday night.
With the win, FGCU remains unbeaten in conference play and expands its winning streak to a Division-I program record 11 in a row – tied for the seventh longest in the nation. The win also marks FGCU’s 100th all-time ASUN win.
“We played a really strong game, and – for the most part – put together a full 40 minutes,” said FGCU head coach Joe Dooley. “We had some lapses on both ends of the floor in spots in the first half and early in the second half, but we responded well. We took care of the ball, Zach and Brandon played terrific to set the tone and we had a pretty good defensive performance as well.”
Zach Johnson (25) and Brandon Goodwin (24) dominated Jacksonville’s defense as the guards nearly outscored JU’s entire team with their 49 points.
Dinero Mercurius had 11 points to be the only other double-figure scorer for the Eagles, shooting 48.5 percent (32-66) from the floor and holding the Dolphins to 39.2 percent (20-51).
Going into halftime with a 33-25 lead, FGCU cut the Dolphins’ lead to just five with two minutes left in the second half. However, a strong defense led to a dominant closing second half.
With the ball and a chance to make it a one-possession game at the 18-minute mark, JU was forced into a last-second shot. However, that miss led to Goodwin starting a 9-0 run for the Eagles.
From that 9-0 run, FGCU continued to dominant the rest of the game.
The Eagles had dominant play in the paint, out-scoring the Dolphins 46-22. Jacksonville was also out-rebounded by the Eagles, 39-34.
Jace Hogan led Jacksonville with 17 points, while Tanner Rubio added 13 as the only double-figure scorers for the Dolphins.
Scott Jr. finished with eight points and six rebounds, while Johnson added four steals and six rebounds.
Christian Terrell finished with five rebounds, a game-best six assists and a steal in 31 minutes.
Next, the Eagles will travel to NJIT (12-12, 5-4 ASUN) to take on the Highlanders Thursday, Feb. 8 at 7 p.m. before heading to USC Upstate on Saturday, Feb. 10 at 4 p.m.