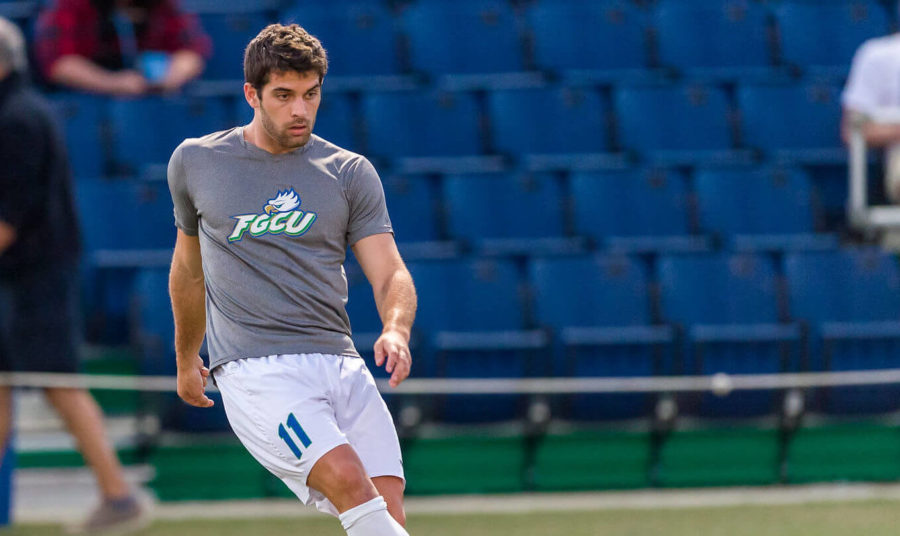 After going undrafted in the 2018 MLS Super Draft, Albert Ruiz, former Herman trophy finalist and the nation’s leading goal scorer in 2016, is currently on professional tryout with the Chicago Fire.
The Barcelona native finished his FGCU career as the all-time leading scorer in FGCU with 34 goals, nearly double than any other player in program history, as well as 76 points in his four-year stint with the Eagles.
In his first game with the Fire, he came in as a substitute in the 63rd minute against the University of South Florida and his former coach Bob Butehorn. Ruiz helped to defeat USF in the first round of the NCAA tournament in 2016. Ruiz had the clinching goal in penalty kicks to help give FGCU the win before they eventually fell to UNC in OT, where they played most of the second half down a man.
Ruiz played three seasons with Butehorn before the program’s founding coach left for USF for the 2017 season and Jesse Cormier came in from Vermont to help the Eagles to an ASUN Regular Season Championship.
After an injury before the fall season started, Albert Ruiz only made four starts in his senior year and scored in his first game back. Cormier had so much high praise for his star player.
“He is just a presence,” Cormier said.  “He is a phenomenal talent and he is also an amazing human being. He’s a great leader and he shows us how to do it.”
In his first game with the Fire, he played for 27 minutes and was on the field for the second goal scored by Elliott Collier in the 76th minute in a 2-0 win over the Bulls. Like Chicago and NYCFC did a couple years back at FGCU, the Fire are training in Florida and had the opportunity to play USF.
Chicago will have five more preseason games, giving Ruiz a bit more time to prove why he is ready to play at the professional level full-time before they decide if they want to sign him for the season. Should he get signed, he would join former teammates Aaron Guillen and Rodrigo Saravia as well as third-round pick in this year’s draft, Nico Samayoa, in the MLS.