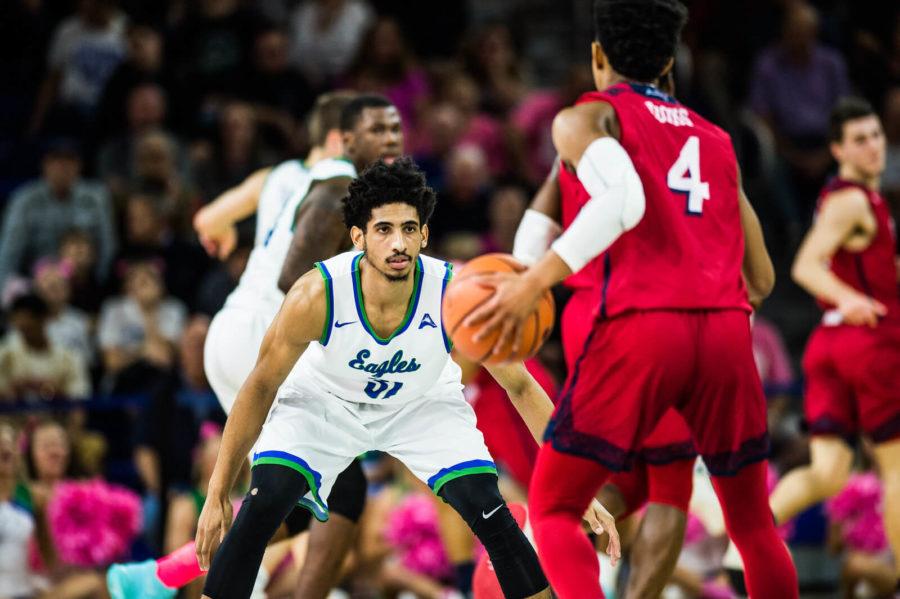 Following the Eagles’ 65-60 win over NJIT and Lipscomb’s win over Jacksonville, FGCU secured a share of the ASUN regular season championship.
With the game tied at 65 late in the second half, Dinero Mercurius hit a huge three-pointer to put Eagles up three and they would go on a 7-0 run to close out their 12th straight win and keep their unbeaten streak alive in conference play.
FGCU had five scorers in double digits with Terrell scoring a team-high 17 for the most points he’s had since mid-December. The dynamic duo of Brandon Goodwin and Zach Johnson scored 29 points combined and Antravious Simmons and Mercurius each added 12 and 10 respectively.
“We got some veteran’s and we got some depth,” said head coach Joe Dooley. “The big thing is we need to get healthy. It was a heck of a game tonight. NJIT is really good and you got to give them credit for the problems they gave us. The guys have really bought in and are really starting to figure it out and play well.”
The Eagles shot 57 percent from behind the arc and for the first time in the last couple of years were outscored in the paint but had some highlighted alley-oops to Goodwin from Johnson.
It was a very strange first half as FGCU left with a six-point lead, but the Eagles had   10 turnovers and did not have a free throw attempt compared to the Highlanders who had 12. Anthony Tarke accounted for all but 12 of of NJIT’s points at the half as he finished with 17 through the first 20 minutes.
FGCU though had five three-pointers with Johnson hitting two along with Goodwin, Terrell and Mercurius all knocking one down early, and despite shooting a little above 53 percent from the field, only took a 35-29 lead into the locker room.
Out of the break, Christian Terrell scored five straight, which led to a 9-0 lead to give the Eagles their largest lead of the game. The Highlanders started to launch the three ball and could not miss. Abdul Lewis hit his fourth three in as many tries and later tied the game up with a lay-up, but the Highlanders never were able to grab the lead and FGCU earned their 19th win of the season.
The Eagles will look for a sixth straight 20-win season on Saturday vs. USC Upstate on Saturday at 4 p.m. The Spartans currently sit at the bottom of the conference with Stetson and lost earlier this season in Fort Myers, 75-58.