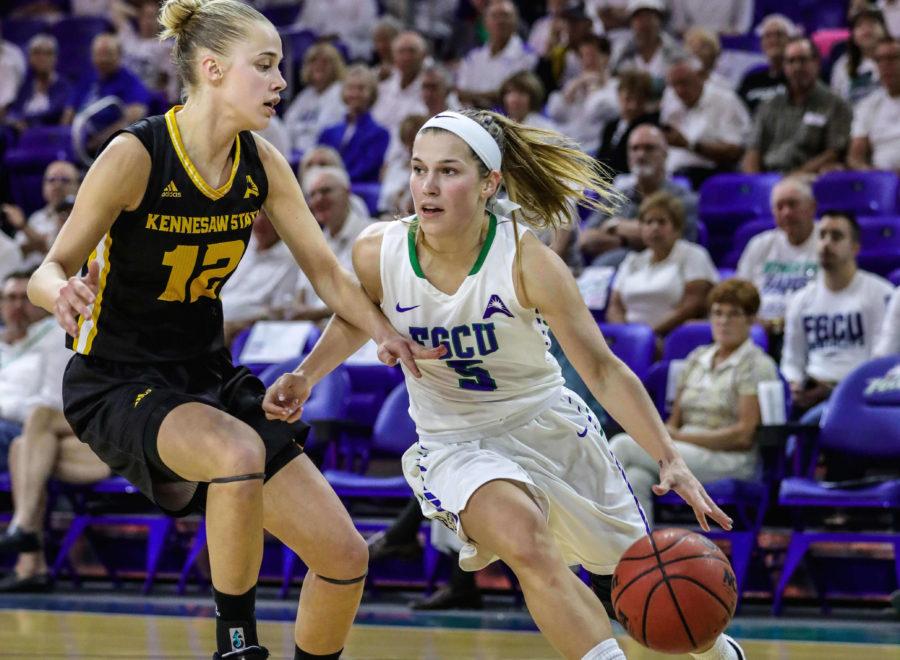 With a chance to clinch at least a share of the ASUN Regular Season Championship and a top-seed in the ASUN Tournament, the Eagles ran away with this one with a 78-51 win.
FGCU only led by two after the first quarter, but a 28-point second quarter gave the Eagles a 21-point lead into the half, and they would cruise from there scoring 34 points in the second half to get the win the blowout win.
Dow and Julien both had 15, and Taylor Gradinjan had 12. She now passes Shannon Murphy for sixth all-time in points with 1,188 points. The Eagles had two other double-digit scorers in Lisa Zderadicka and Nasrin Ulel who each had 11.
With her 10 rebounds, Tytionia Adderly tied Sarah Hanson’s single-season record with 256 rebounds in the Division I era. Jessica Cattani also reached 500 career points during the win.
“I thought the first quarter was really tight,” said head coach Karl Smesko. “Kennesaw came out and played really well. Fortunately, in the second quarter, we played exceptionally well. We got the ball out in transition. China and Rose had big quarters. We were bale to extend the lead in the beginning of the third quarter and kind of ride the game out.”
FGCU was without starting guard Erica Nelson, who missed the game with an ankle injury, and Zderadicka in her place as she scored four early points. The Owls though shot 46 percent in the first quarter and trailed 16-14.
They went nearly five minutes without scoring, but ended that drought with a lay-up and a three, and then Dow was able to take over from there, as she scored. The Eagles finished the half on a 17-3 run and took a 44-23 lead into the break.
They shot 79 percent in the second quarter and Dow had all of her first 15 points in the game as well as in the second 10 minutes.
“I think it’s fun,” said Dow.  “That’s what [Smesko] wants too. He tells us to get out more in conversion. Once you get out in conversion, you get open people, so pushing the ball and doing things we need to do to get people open. It always works and it is always fun for us.”
FGCU began the second half on another 8-0 run and were able to rest key players as no starter played more than 28 minutes. The Eagles did learn that they will be facing NJIT in the first round of the ASUN Tournament, but will first play Stetson on Saturday, Feb. 24 at 1 p.m.
In the two previous meetings with NJIT, FGCU outscored the Highlanders by 60 points. They have also won all their previous meetings since NJIT has come into the conference.