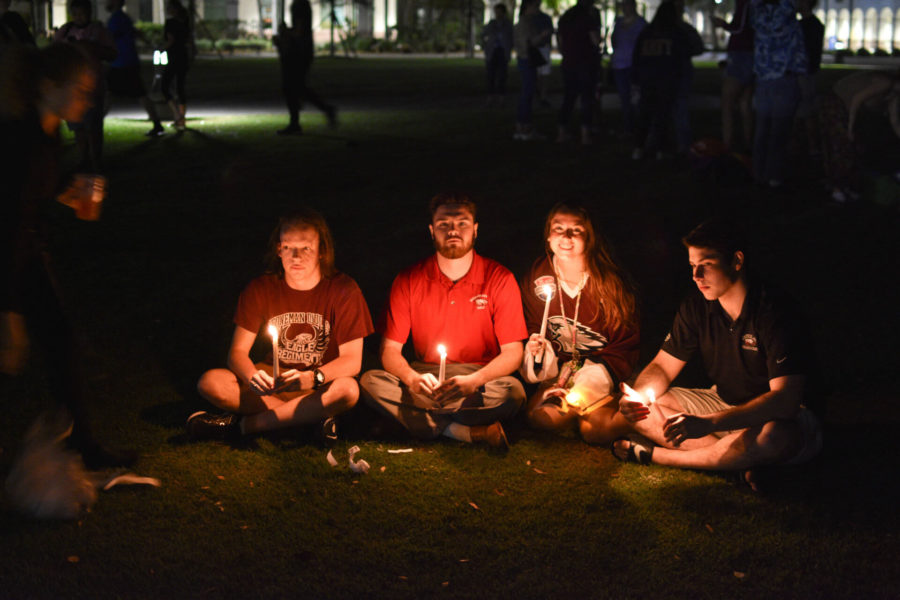 (EN Photo / Christian Rehm) Jordan Moses, left, and three others sit on the library lawn with candles in hand. Moses gave a personal testimony of what he went through during the vigil.


In the wake of the shooting at Marjory Stoneman Douglas High School last Wednesday, February 14th, FGCU’s Student Government held a candlelight vigil to remember the 17 lives lost that day.
A large number of students gathered around Veteran’s Pavilion Tuesday, February 20th, to listen to testimony from Douglas graduates who attend FGCU and what they went through the day of the shooting.
“Honestly, it was the scariest day of my life,” Jordan Moses, an FGCU student and Douglas alumnus said to the crowd of over 200 people.
Seventeen students stood in front of the pavilion holding candles, some from Douglas High School, some not, to honor the lives lost in what is now the deadliest high school shooting in American history.

“People ask, ‘Are you ok?’ And you don’t really feel like talking about it so you say, ‘Yeah,’ But you’re not,” Moses said. “No one from Parkland or Coral Springs is okay right now.”
91 students are currently enrolled at FGCU from Douglas High School, with many more having an affiliation with the school.
“I never thought out of the 17 lives lost, three would be close friends of mine,” Natalia Martinez, a Douglas alumna said. “This has been the worst week of my life.”
Guidance counselors were in attendance at the vigil for any of those looking for someone to express their sorrow to or just discuss the event in general.
The vigil came on the same day that 100 student survivors from Douglas High School took the seven-hour ride to Tallahassee to meet with legislators. The students hope to make strides in moving towards discussion on gun control in the state of Florida. Along with dialogue, the students want legislators to look into revising state mental health and gun laws to prevent the events that took place in Parkland from ever happening again.
“Parkland is not going to stop until we see a change,” Kelsey Maingot, of Parkland, Fl, said through tears at the vigil. “Until someone in our White House, in our Congress, in our government who is supposed to be protecting us makes a change.”

Students at West Boca High School staged a walkout earlier in the afternoon on Tuesday, and made the 10-mile walk to Douglas High School in a show of solidarity with the students and survivors. Douglas High remains closed to faculty and students at this time. Officials hope to reopen by next Tuesday, February 27th.
Student organizers, including some from Parkland, are planning a “March For Our Lives” walk in Washington D.C on March 24th. Organizers “demand that a comprehensive and effective bill be immediately brought before Congress to address these issues,” according the its mission statement.
“This is a time of wanting to reach out. To do something,” FGCU Senate Secretary Jason Orellana said. “This is a time to relieve those who are hurt and to make sure this will never happen again.”