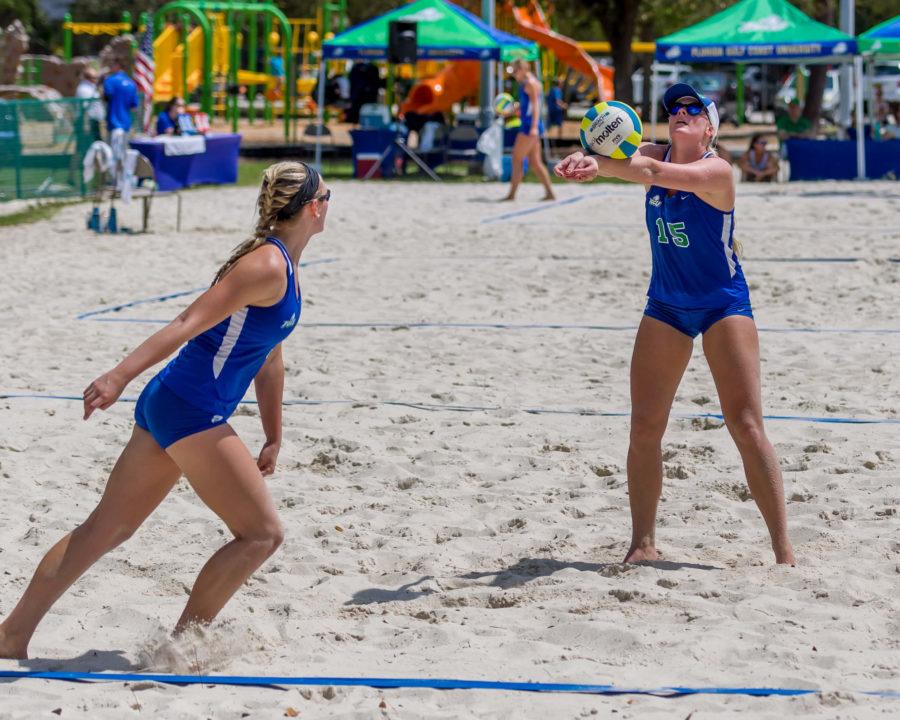 With the Beach Volleyball season set to begin in March, the ASUN has selected four Eagles to the ASUN Preseason All-Conference Team.
Amanda Carroll, Karissa Rhoades, Mackenzie Allen and Katherine Puisis were all named to the team. The four members for the Eagles are the most from any team with one more then Stetson, who had three.
“It’s really exciting to see four of our players being honored as preseason all-conference,” said head coach Matt Botsford. “These four were so consistent last year and played a big role in putting our team in positions to be successful. I am eager to see them each take another step in their development as we move into the season, and I know they are eager to get started.”
Carroll and Allen went 12-11 last year and won 11 matches as the #1 pair. Carroll, who was the ASUN Player of the Year in Volleyball in the fall, is in her junior year with FGCU. The two played together a few times their freshman season and compiled six wins.
Rhoades, who also helped the FGCU Volleyball team reach the ASUN final, played with Puisis in the #3 pair and won 15 out of 23 matches played. They were the only duo to beat FAU, as well as earning big wins against Mercer and North Florida in the ASUN Tournament.
The rest of the team consists of other familiar players from the volleyball team in Giovanna Borgiotti, Alayna Ryan, Courtney VanLiew, Snowy Burnam and Kaitlan Krivdo.
They also have Kellie Pernula, who last appeared as a freshman for beach volleyball after sitting out 2017 with an ACL injury. Kayla Whetstone will be making her debut as a freshman from Arlington, Texas.
A season ago, the Eagles finished with a record of 15-9 including winning their first six games as they got off to by far their best start in program history. They would eventually fall to Stetson for a second time last season in the ASUN championship.
They will look for their first conference championship this year starting on Friday, Mar. 9 at 12 p.m. against Houston Baptist. They will face off against six ranked opponents this season in #3 Hawaii, #8 South Carolina, #10 FIU, #11 Georgia State, and #12 TCU as well as #15 Stetson in ASUN play.