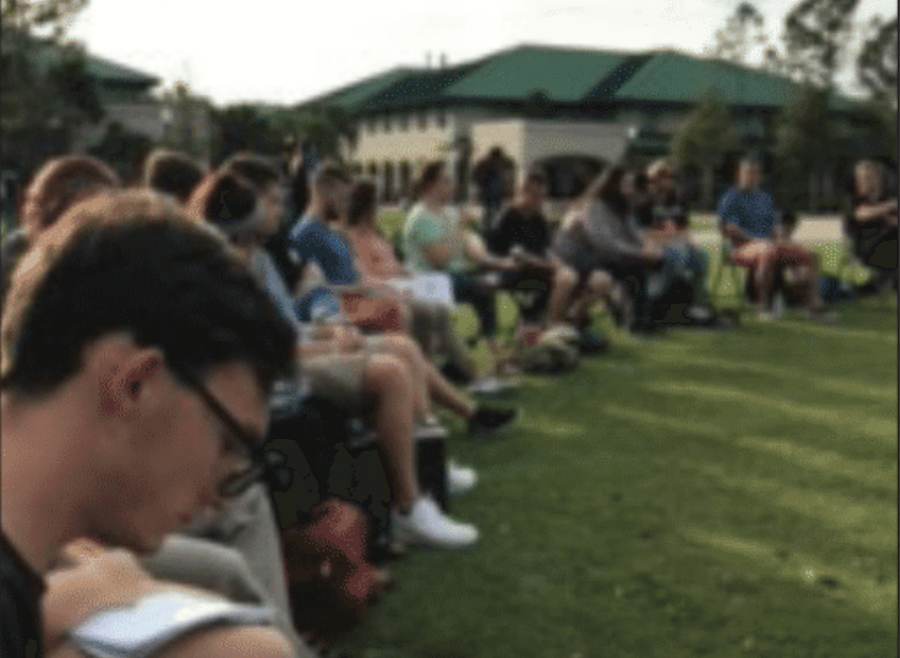 At 5:30pm on Tuesday February 13, 2018, the American Democracy Project (ADP) hosted their semester dialogue on the library lawn of FGCU.

The dialogue was put together by political science professor, Dr. Sandra Pavelka as well as students involved with ADP.

“When I started participating with ADP here at Florida Gulf Coast University, I wanted to bring in the component of restorative dialogue to have such a dialogue that would engage the campus community about topics facing the community and society as a whole,” Dr. Pavelka said.

Each dialogue of the semester has a unique topic, and this one in particular was titled the Inclusivity Restorative Dialogue, and had focus on the power of millennials. Pavelka used the timeless tactic of a talking stick to allow each student to speak their mind uninterrupted and give everyone a chance to speak.

Millennials have gotten a bad repfrom previous generations, claimingthem to be entitled, spoiled and lazy among other things. This dialogue allowed for students to come together to discuss some of these accusations and how as millennials feel they are portrayed compared to how they feel about their own generation.

Matt a senior at FGCU planningto go to law school and also an active member in ADP had some key points to bring up negating the stereotypes of millennials.

“It’s kind of disappointing to see older generations give us all a bad rep when we’re the most educated generation there’s been in our country’s history,” Matt said.

According to the Pew Research Center more than 34% of millennials have college degrees and those numbers continue to rise as more millennials graduate.

This already makes the millennial generation more educated than any of the previous generations.

“We are the largest voting base in the nation right now, and we are going to be the ones who decide elections for the next decade to two decades,” Matt said.

This dialogue wasn’t entirely about defending the millennial generation, but also discussing ways to communicate the differences between age groups to make positive impacts on our society.

“Bridging the gap” was the next talking point that went around the circle, and students discussed ways to talk about generational differences as well as issues in society that millennials face that older age groups may not be informed on.

One student who part of the study abroad program from Tunisia gave her own experience of how to bridge the gap between generations.

“We’re not supposed to be doing what they did (previous generations) because we don’t have to. Whatever they did back then, was what they had to do. We are facing different obstacles and different experiences so we cannot really compare the two. We just have to be patient with them and communicate with one another,” she said.

The last talking point that was brought up was in respect to how millennials are now the largest voting group and will continue to be for the next several elections.

Dr. Pavelka wanted to hear from students what issues they deemed most important to be addressed in society and by political officials.

“The most important thing to consider when trying to discuss differences with previous generations, is respect and tolerance of one another.

Millennials are in a position of power to challenge the status quo and make the country listen to their voices; that’s impactful,” Dr. Pavelka said.

One student named Ryan, gave examples of issues that summarized what millennials are concerned about, that aren’t respectively shared by previous generations.

“The things that I’m most concerned about is making sure that by the team we all reach a certain age we can live in a country where, as someone else said, you don’t go in debt in order to better your education, that you do have a raised minimum wage that can keep up with inflation, and that you do have the ability to pay for more affordable healthcare,” Ryan said.

The students had so much they wanted to share with one another that the dialogue continued until after 7pm when the sun had set.

“I’ve facilitated many dialogue circles both on and off campus, and they work based on restorative justice. It is a place to share your thoughts among others, and learn from each other’s experiences which shape how they view the particular issue being discussed,” Dr. Pavelka said.

Dr. Pavelka hopes that this dialogue will spark more conversations about the power of millennials, and how they can make the changes they want to see actually happen.