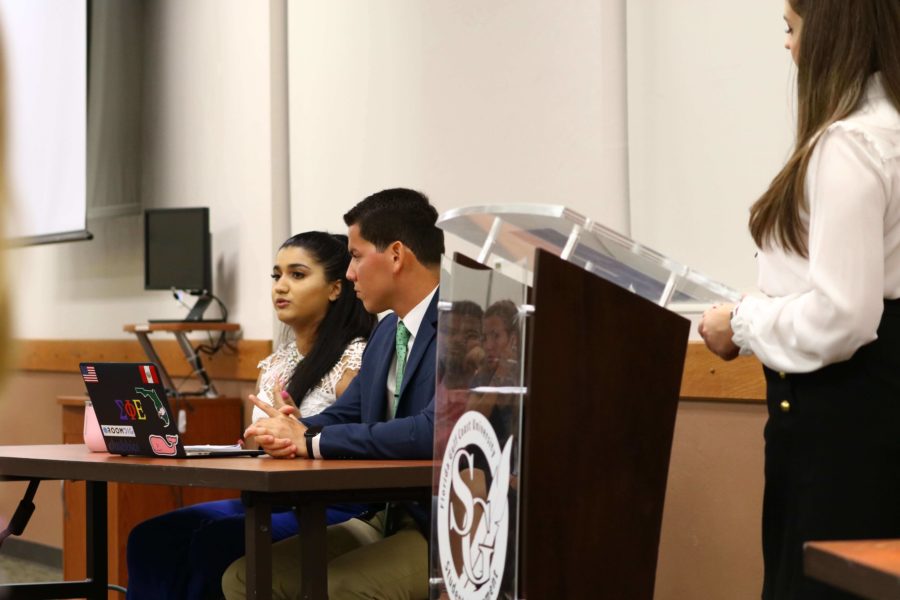 On Wednesday, Feb. 20, incumbent Student Body President Jalisa White and Nick Vargas debated in Cohen Center room 247 for Student Government’s executive position, where they discussed their visions for the next year.
They were joined by Vice Presidential candidates Nick DeGuzman from the SOAR party and Alexandra Sao from the ACTION party, respectively.
Guided by a moderator, the candidates were asked individual party questions, as well as debate questions like how each candidate planned to combat the issue of the school’s high occupancy, and how it affects student success.
When asked what past initiative experience qualified the candidates to be Student Body President and what they planned to do to stay engaged and motivated, Vargas said that it’s important to stay close to the university and provide outreach for the community and alumni in the area.
Vargas is a former Interfraternity Council President, member of Sigma Phi Epsilon and current Vice President of the Student Alumni Association.
“We preach to everybody that together we are one,” Vargas said.
White said it’s important to stay passionate about the student body.
“It’s never about yourself. It’s always about serving students, and the minute that you stop serving students is the minute that you should stop being in this position, and I think that it’s really important for us to continue to do that especially with our entire Senate,” White said.
White, the current Student Body President, has served as an Emerging Eagles Mentor, Service Learning ambassador, Greek Programming President, alternative spring break participant, Leadership through Service mentor and isa sister of Kappa Delta.
When the candidates were asked what they thought were the biggest weaknesses in the other party’s platform, ACTION said they believed SOAR’s platform was redundant and not detailed enough.
“We’ve checked out their platform throughout the week. One of the biggest concerns about their platform is that it’s so vague. That’s what stood out the most to us,” Vargas said.
Sao said there is a “if  ain’t broke don’t fix it” mentality and that it is problematic that initiatives may exist or existed in the past but are “not fully being carried out.”
“It’s problematic for the fact students don’t know this is going on,” Sao said. “They don’t know that we’re sitting in a room right now discussing the fact that all of this exists, or we’ve done this once or twice. It’s on the platform because for the majority of students, they are not aware of these programs.”
Sao said there are things that students want fixed but will not be fixed based on SOAR’s platform. DeGuzman challenged ACTION’s initiative regarding the development of a 5-year strategic plan for Student Government.
“Each year, each party comes up with their own initiatives, their own platforms and their own ideas and it’s important that we don’t impede upon that and hinder the growth of Student Government,” DeGuzman said.
Deguzman said leaders “shouldn’t be deciding Student Government’s future.”
“So, by limiting ourselves to a 5-year strategic plan, it will put us in a pigeon hole and prevent us from growing year to year.”
On Feb. 20, White announced her candidacy under the SOAR party – which stands for Student Services, Outreach, Advocacy and Representation –  along with running mates DeGuzman and Michel.
Vargas also announced his candidacy on Feb. 20 under the ACTION party, which stands for Academic Excellence, Civic Engagement, Improved Student Government, Action for Tomorrow, Outreach and New Beginnings.
The ACTION party plans to create a 5-year strategic plan for Student Government, establish a Student Government recruitment committee to increase  interest in the organization, establish a campus police review board and plans to increase civic engagement efforts as well as provide resources for academic excellence.
SOAR’s Student Services initiative focuses on offering free printing cards that would allow students to print 33 pages worth of material. SOAR also plans to implement a Library 24/4 initiative, which aims to keep the library open 24 hours a day, four days a week. A student survey would determine which days those will be, according to SOAR.
Improving campus Wi-Fi, revamping the Cohen Center, giving RSO’s access to view funds in Account without having to get in contact with the A&S Budget Assistant and improving parking safety measures by adding garage mirrors, a new main campus shuttle route and “exploring” Lutgert Garage improvement are also a part of the platform.
Check back with Eagle News for updates.