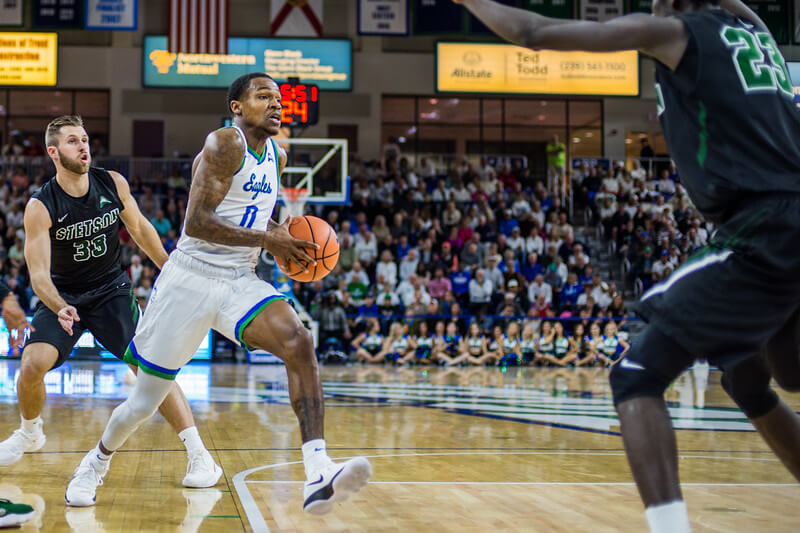 In their final regular season game of the season, the Eagles made history becoming the first team to finish undefeated on the road in back-to-back seasons with a 76-60 win over Stetson.
FGCU finishes the regular season with a 12-2 record and will face USC Upstate in the first round of the ASUN Tournament on Monday, Feb. 26 at 7 P.M. in Alico Arena.
The Eagles snapped a mini two-game skid and swept the season series over the Hatters. FGCU combined to beat Stetson by 54 points in the two meetings to bookend the conference regular season.
“You always want to have momentum going into the postseason,” said head coach Joe Dooley. “We had a little bit of a run going and obviously last week scuffled a bit, but hopefully we got a little momentum back.”
Brandon Goodwin finished three points shy of his career-high of 30 with 27 and Christian Terrell added 17, with 10 of them coming in the opening half.
Despite still not having a game in the regular season with all 12 scholarship players dressed, the Eagles had RaySean Scott back for the first time in two games after an illness. He gave FGCU 11 off the bench and was key in the Eagles 38-22 advantage in the paint.
“It feels great to be able to go fight for teammates,” Scott said. “I miss not being there will my teammates. Its kind of hard when you sit on the sideline seeing what I could do and don’t get to do it because the situation I am in.”
In a relatively close first half, the Eagles took a seven-point lead into the break. However, after Goodwin blocked Divine Myles to end the half, he was called for a technical foul for something Goodwin said toward Miles after the buzzer.
FGCU seemed upset that there was no technical foul called earlier after Christiaan Jones appeared to have gestured at the Eagles bench moments earlier.
FGCU shot just 36 percent but had their best defensive half in quite some time, holding the Hatters to 26 points and 32 percent from the three. Zach Johnson, RaySean Scott and Michael Gilmore all had two fouls in the first half, with Johnson playing just six minutes in the opening 20.
It was all dominance from then on as Stetson got it down to two early in the half, but FGCU took off for 43 points in the second half to earn the 16-point win.
“We just got to string together two good halves right now,” Goodwin said. “Defense wins games, so were just focused on guarding the ball, rebounding and finding guys in transition.”
Divine Myles did become Stetson’s all-time leading scorer in the second half, breaking Kerry Blackshear’s record as he broke the scoring record with 1,827 points. He only finished with eight. Jones was the only Hatter to reach double figures with 11.
As the top seed, the ASUN playoffs will run through Alico Arena as long as the Eagles are alive. With a bunch of teams all battling for a home game for the tournament, Jacksonville and NJIT earned the third and fourth seeds respectively.
The Dolphins will face Kennesaw State and the winner of that game will play the winner of Lipscomb and Stetson. On FGCU’s side, the Highlanders will play UNF for the right to play the winner of the Eagles and Spartans’ first round matchup.