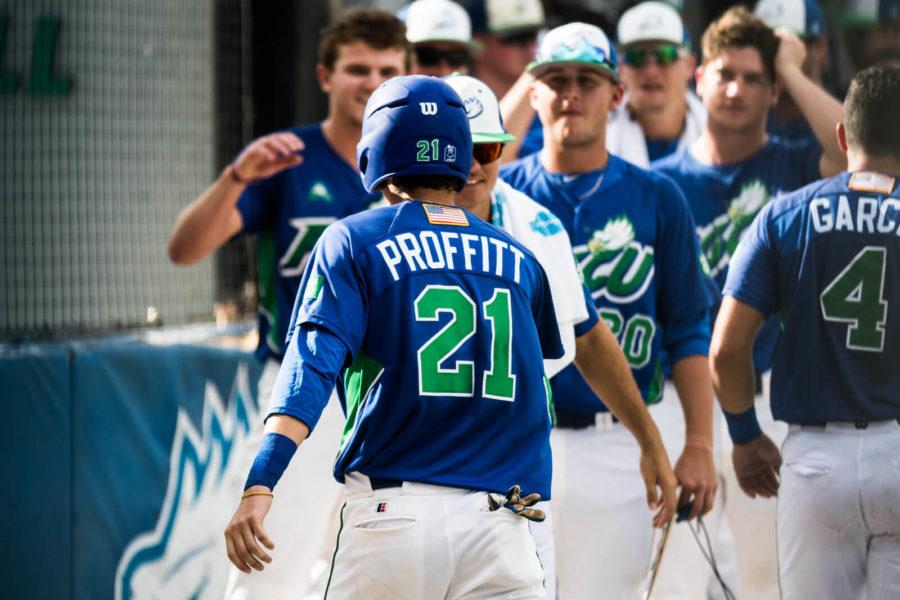 In game two of a three-game series against ETSU, the Eagles defeated ETSU 6-1 for their fifth win of the season.
Josh Dye (1-0) made the start and went seven innings, allowing six hits and striking out five, one shy of his career high set. Ryan Simpler matched zeroes with Dye until the seventh, when the Eagles were able to break through against him.
“He was awesome,” said head coach Dave Tollett on Dye. “It was like a video game for me. He was moving the ball in and out, up and down, speeding them up, slowing them down. That’s what Josh does. When Josh is on like that, he is pretty good.”
Dye got into immediate trouble in the first as the Buccaneers had runners on second ad third and nobody out, but Dye struck out the next three batters to keep ETSU off the board in the top half of the first.
ETSU had another chance to grab the opening run in the third after Eli Lovell misplaced a fly ball to the left but responded by throwing him out at the plate on a single from the ensuing batter.
Kohl Gilmore nearly hit his first home run of the series and fifth of the year but settled for a long double and was left stranded.
FGCU was finally able to break through in the seventh after three straight hits, starting from a double from Jake Smith. Christian Proffitt drove in his second collegiate run with an RBI single and then would come around to score from first on a double from Marc Coffers.
“I’m feeling pretty good,” Proffitt said. “I’m feeling a bit more confident than last week. I’m just trying to stay on top of the ball and not dropping my shoulders.”
Gilmore would then clear the fences in the eighth and Richie Garcia followed that with a long ball of his own for his first run of the season to make it 4-0.  Proffitt added two more with a two-run single and the Eagles went up by six.
Peyton Grey finished off the six out save allowing a run in the ninth, but registered his first career save out of the bullpen.
“I’m happy today because we got the win today, “ Gilmore said. “It was a heart-breaking loss last night after a four-game sweep last week. I’m just really happy for the guys and happy we got the win.”