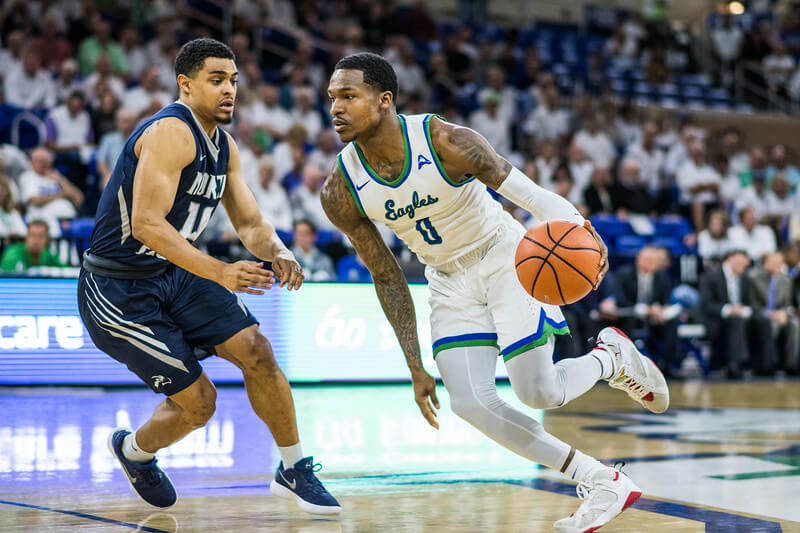 After an incredible 11-game win streak to start conference play and a regular season championship for a second straight year, the FGCU men’s basketball team had three awards handed out to them led by Brandon Goodwin.
For a second straight season, Goodwin was named the ASUN Player of the Year. Zach Johnson also appeared on the first team All-Conference team with head coach Joe Dooley being named ASUN Coach of the year for a second straight season.
“Brandon has put together, once again, one of the best seasons in program history,” Dooley said. “Zach has been arguably our most consistent player all year, and combined with Brandon their honors are certainly well deserved. They have a great group of teammates around them as well, and hopefully we’re able to reach our ultimate goal in one week with another ASUN Championship.”
Goodwin finished second in the league in scoring behind fellow ASUN team member Garrison Matthews at 18.4 points per game. He also led the team with 4.8 assists per game and was tied with Michael Gilmore for the team lead in rebounds. He had 14 games scoring 20 or more points, including six of them in conference play. The senior has scored 83 points in his last three games heading into the ASUN Tournament.
Johnson was second on the team in scoring at just under 15 points per game and had 65 steals to lead the conference. He had a steal in all but two games this season and scored as many as 27 points in the opening game of the season versus Illinois. He shot 46 percent from the field and 34 percent from behind the arc.
Dooley led his team with a 21-10 record and a 12-2 conference record in route to his ASUN Coach of the Year. The Eagles played close with #11 Wichita State leading by as many as seven in the second half before eventually falling 75-65. He led FGCU to a quality 75-68 win over UT Arlington while leading the Eagles to five straight 20 or more wins in his tenure as coach.
FGCU will open up the ASUN Tournament as the top seed versus USC Upstate on Monday at 7 P.M. as the Eagles look to advance for a third straight season.