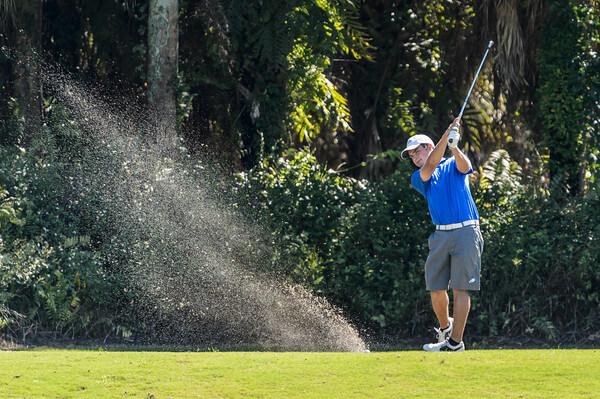 The FGCU men’s golf team posted another strong performance in the final round of Stetson’s Legacy Intercollegiate at The Legacy Club at Alaqua Lakes Tuesday. The Eagles completed the tournament tied for first before falling in a one-hole playoff to Bethune-Cookman.
FGCU shot a final-round 296 – the second-best score of the day – to overcome a three-shot deficit entering the closing 18. Bethune-Cookman recorded a 299 final-round total, and the two Florida schools entered the one-hole playoff tied with a three-round 876 total (+12) – seven shots better than any other institution in the nine-team event.
The Eagles had the option of sharing the title with Bethune-Cookman after 54 holes but wanting to give his team the experience of a playoff and match-play feel for potential upcoming postseason events, FGCU head coach Eric Booker opted for the playoff.
All five members of FGCU and Bethune-Cookman competed, but the Wildcats posted better scores than four of Eagles’ players to give them the hardware.
Junior Andrew Potter and freshman Cole Castro both finished in the top five overall to place the Eagles as tied for third – three strokes out of first – with a 217 (+1) three-round total following a final-round 76 and Castro tied for fifth, just one shot back with a 218 (+2) after a closing 73 – the best among FGCU’s players on Tuesday.
“I certainly wish we would have won the playoff, but it was exciting to watch the guys go through that, and hopefully they’re able to use it as a learning experience,” commented Booker, who helped guide the Eagles to a spring-opening win two weeks ago. “I’m pleased with the progress the guys have made and the direction that we’re heading. We’ve played two solid tournaments in a row and feel optimistic about the rest of the season.”
In addition to Potter and Castro, sophomore Doug Smith tied for 14th after a closing 74 for a 222 (+6) total, while redshirt senior Michael Keymont shot a final-round 75 and tied for 19th with a 223 score.
Redshirt Grant Renegar rounded out FGCU scoring with a 74 on Tuesday to tie for 23rd at 224. Renegar tied for the second-most pars over the three rounds with 39 (leader: 40), while Castro played the par-5s better than everyone save for two at -5 for the week. Keymont (38) and Smith (38) were right behind Renegar in total pars, while Castro and Potter both rolled in 11 birdies – one behind the leaders in that category.
The Eagles return to action when they head across Alligator Alley to compete in the Fort Lauderdale Intercollegiate Monday and Tuesday, Mar. 5 and 6.