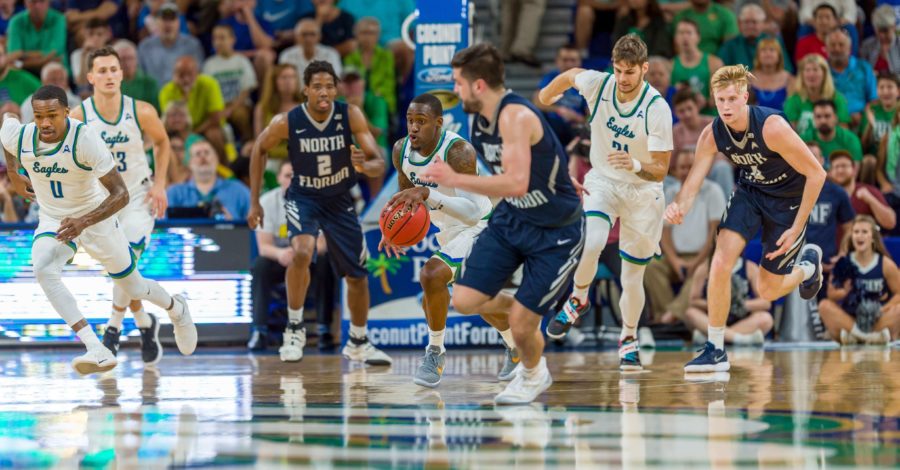 In the semifinal game of the ASUN Tournament, the No. 1 FGCU men’s basketball team faced off against No. 5 UNF at home and had a dominating performance.
The Eagles shot 55 percent from the field and 54 percent from behind the arc and hit the most field goals and three-pointers in FGCU history. Senior guard Christian Terrell became the first member in program history to have 1,200 points, 500 rebounds and 200 assists.
Brandon Goodwin led FGCU with 18 points. Zack Johnson and Michael Gilmore each had 17 and 16 respectively and they had two other double figure scorers in Christian Terrell and Dinero Mercurius.
“I thought the guys did a good job on the run,” head coach Joe Dooley said. “I thought after we settled down in the second half and got some stops, I thought we did a much better job. I thought the guys did a terrific job sharing the ball. I thought the sharing of the ball and the shot selection were a big deal on the offensive end.”
The game started with UNF rolling, going on a 13-4 run. The Eagles responded with five to make it 9-13, but the Ospreys came back to score two making it 15-9 in favor of UNF.
Out of the timeout, the Eagles came out strong taking the lead 16-15 after going on a 7-0 run. However, the Ospreys responded after calling a timeout going on a 4-0 run to regain the lead.
With very little happening on the defensive end, the game went back and forth throughout the first half of the first quarter.
With seven minutes left in the first half, the Eagles went on a 12-3 run to put FGCU up on top 36-27. Out of the UNF timeout, five consecutive three-pointers and layups from Terrell furthered the Eagles lead to 45-29.
The Ospreys responded just before halftime to cut the lead to 49-37. Going into halftime, the Eagles remained in the lead with a score of 55-44 led by Johnson.
“I’m just trying to take open shots,” Johnson said. “I’m just taking what the defense gives me and move the ball around.”
Out of halftime, the momentum seemed to be going back and forth with each team responding.
Back to back three-pointers from Johnson sent the crowd roaring, putting the Eagles up 65-49 forcing UNF to take a timeout.
The Eagles continued to dominate in the second half, going on a 5-0 run to extend their lead to just under 20 at 72-53 and cruised from there for a 23-point win.
“Zach got going and was able to find a good rhythm,” Goodwin said. “We found him and got us some good looks. That just opened it up from there. We guarded the ball a lot better than we have been so that was a big emphasis for us going into the game.”
FGCU will take on Lipscomb in the finals on Sunday at 3 P.M. The teams split the regular season meetings with each team winning on the road.