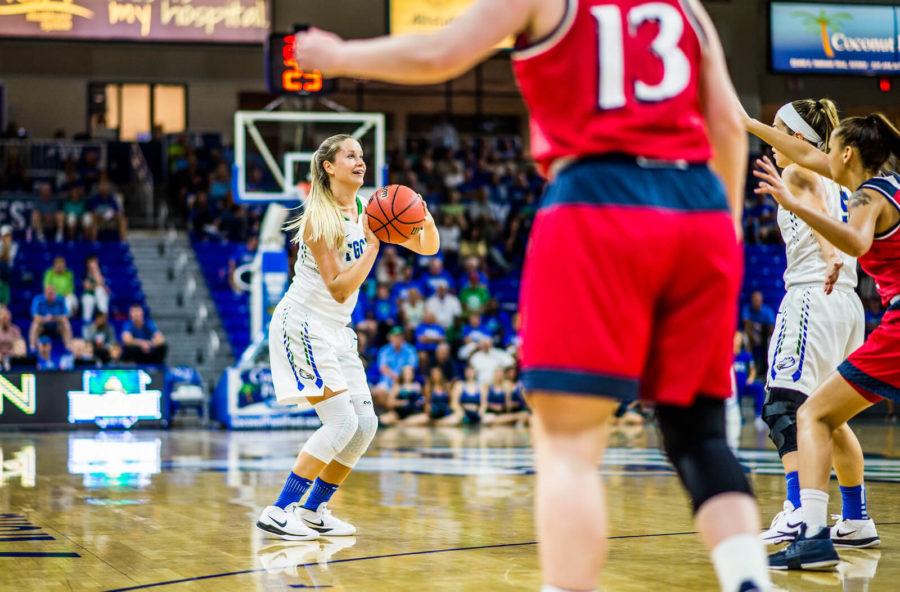 In the opening round of the ASUN Tournament, the FGCU women’s basketball team defeated NJIT 83-62 to move into the semi-finals. This win was also the team’s 300th win in the Division I era.
It was a dominating first quarter as the Eagles scored 30 points,led by Taylor Gradinjan who had four of her six three pointers in the opening quarter.
“We got off to a fast start offensively in the first quarter,” said head coach Karl Smesko. “Tay was hot early which really helped us get a little bit of a cushion. I give NJIT credit. They played well today and there were stretches that they outplayed us and showed us something we need to clean up going forward.”
Gradinjan finished with 20 and every starter other than Tytionia Adderly finished with at least 10 points. Rosemarie Julien had 16 while Nasrin Ulel and Erica Nelson had 13 and 11 points respectively.
During the game, FGCU set a program record in three-pointers. They came into the game with 366 for the year and broke the record of 372 and are now at 380. China Dow also reached 1,000 career points, becoming the second Eagle after Gradinjan to reach that accomplishment this season.
“It was just another game,” Dow said. “It’s good to be in this 1,000 point club, but at the same time, we’re trying to get farther than this 1,000 point club. We are trying to get to the tournament and win games.”
It took just 11 seconds for the Eagles to score their first point of the game and 1:11 before the Highlanders called a time-out. Just one quarter into the game, FGCU had a 30-17 lead.
It was a bit of a struggle in the second quarter as FGCU missed 12 of 16 shots but got to the line 13 times with Julien converting six of seven as the Eagles led by 18 going into the second half.
FGCU led by as many as 27 just 3:19 into the third quarter, but NJIT kept it competitive throughout bringing it down to 18 at one point, but Gradinjan continued to hit from long range, as the Eagles moved on with a 21-point win.
The Highlanders shot 47 percent from the floor, but the Eagles created 23 turnovers and scored 27 points off of them. Though FGCU won the turnover battle, they did commit 16 turnovers which is highly uncharacteristic from the Eagles.
“I think we could have escalated on our lead a little,” Gradinjan said. “We could have played a lot better defensively and we got lazy. I just think now is not the time to be making those mistakes. Now is not the time to be making those mistakes.”
Up next, the Eagles will take on (4) Lipscomb in the semi-finals. The Bisons steamrolled through (7) USC Upstate for their largest win in program history and come in with the conference-leading scorer in Loren Cagle. FGCU was able to sweep the season series with Lipscomb.