Just shy of a second half comeback, men’s basketball falls in ASUN Final 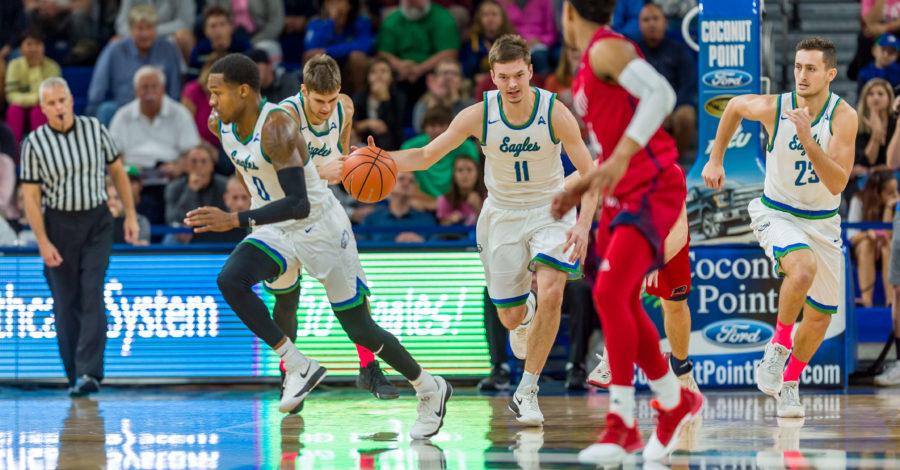 In the ASUN Championship Final against the Bisons from Lipscomb, the FGCU men’s basketball team suffered a tough 108-96 loss after nearly coming back from a 30-point deficit in the second half.
FGCU will play in the NIT and will find out its first-round opponent following the selection show next Sunday, Mar. 11.
Zach Johnson set the single-game Division I program record with 37 points with a record nine three-pointers. Brandon Goodwin followed with a career-high 34 points.
Lipscomb dominated the first half, which ultimately set  the Eagles on a tough road to redemption. The Bisons shot at 65 percent from the floor and led by as much as 32 in the first half, taking a 60-31 lead into the half.
“Give credit to Lipscomb; they started hot and really got going offensively and we had no answer,” commented FGCU head coach Joe Dooley. “We were able to turn them over and mount a comeback in the second half. I’m proud of the guys for the fight they displayed, but we just dug ourselves too big of a hole.”
Lipscomb dominated the beginning of the half led by Garrison Matthews, who scored 26 points on five three-pointers before finishing with 33 points to go along with a game-high nine rebounds.
Unable to get anything going on offense, the Eagles soon fell to 9-21 with 13 minutes left in the half. FGCU was then forced to take a time out as the Bisons went ahead 24-9.
Coming out of the timeout, a Brandon Goodwin and Zach Johnson three-pointer cut the deficit to 15-28, but Lipscomb continued to respond with a strong offense and defense.
The Bisons continued their offensive dominance extending their lead to over 20 points to 19-41 with nine minutes left in the first half.
By the end of the first half, play on both ends slowed down but the Bisons furthered their dominance earning over 60 points in first half to the Eagles’ 31.
Scooting just 12-29 from the floor compared to Lipscomb’s 20-30, a three from Goodwin right before the half forced Lipscomb to take a timeout with just 12 seconds left. The score was 31-60 going into the locker room.
Coming out of halftime, Zach Johnson was out for revenge, scoring four three-pointers in the first six minutes of play.
A technical foul on Lipscomb’s head coach worked in favor of the Eagles as Mercurius earned two free throws for FGCU and a three from Johnson cut the deficit to 50-72 with 14 minutes left in the half.
A full court press in the second half forced Lipscomb to take a timeout, as the Eagles came back from a 30-point deficit to make it 58-76 with 13 minutes left in the game.
Another (three?) from Johnson sent the crowd roaring as the Eagles continued to cut the deficit to within 10, 71-81.
With three-pointer after three-pointer from Johnson, FGCU’s strong offensive performance and Lipscomb struggling on defense, the Eagles continued its 30-point comeback. With 7:41 left the half, the Eagles brought the game within eight points, 79-87.
With four minutes left in the game, the Bisons added a few to extend the lead but the Eagles’ strong three-point shooting kept FGCU within eight points. A fifth and final foul on Johnson forced him out of the game with three minutes left.
The guard was applauded by the crowd as Johnson finished with a record-setting 37 points – scoring 29 in the second half alone, going 9-12 from 3-point range.
Lipscomb ultimately had the upper hand by the end of the game, closing off the ASUN Final with a score of 108-96 over the Eagles.